This post is part of the Hogg Foundation’s “3 Things to Know” blog series, which explains concepts influencing community mental health and our grantmaking. Check out others in this series: BIPOC, Cultural Humility, Trauma-informed Care, Recovery, Healthy Equity,  Social Determinants of (Mental) Health, Resilience and Well-Being. 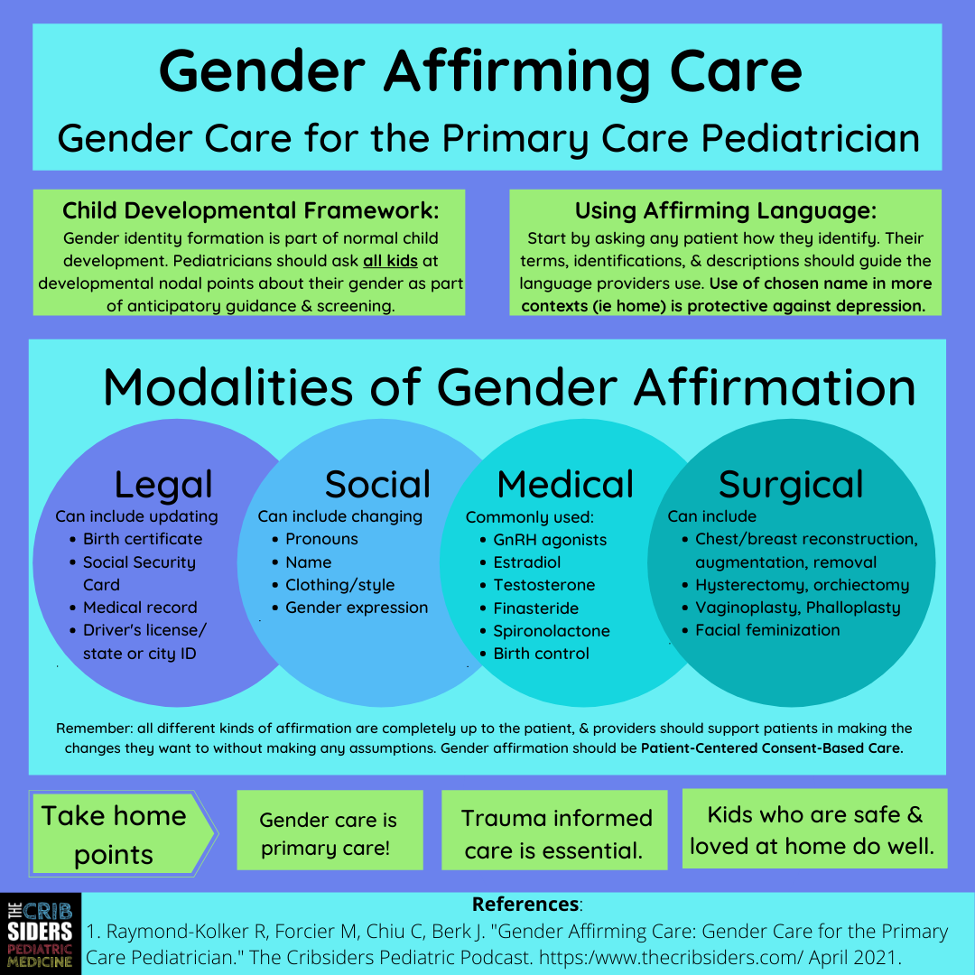 When we talk about public health systems and services, we often refer to “systems of care:” primary health care, mental health care, child welfare, education, and so on. These systems of care help support the physical, mental social, emotional, and developmental needs of children and their families. In this blog post, we unpack a different system of care, which, despite being crucial to ensuring adolescent well-being, has recently come under attack by lawmakers across the country. The form of care is known as “gender-affirming care,” specifically for trans youth, and it is the topic of this edition of Three Things to Know.

Here are three things to know about gender-affirming care for trans youth:

Transgender and gender-nonconforming (TGNC) youth who suffer from gender dysphoria are at a substantially elevated risk of numerous adverse physical and psychosocial outcomes compared with their cisgender peers, including violence, sexually transmitted infections, depression, anxiety, and suicide. Moreover, TGNC youth are subject to “pervasive and profound social stigma,” according to a 2018 report from Pediatrics.

The facts are tragic, but it is not cause for hopelessness. Research consistently demonstrates that gender diverse youth who are supported to live and/or explore the gender role that is consistent with their gender identity have better mental health outcomes than those who are not. Forms of gender-affirming, supportive interventions may include, but are not limited to, social gender transition, hormone blocking agents, hormone treatment, and affirmative psychotherapeutic modalities (i.e., individual therapy, family therapy, group therapy, etc.). Doctors across the nation agree: gender-affirming care saves lives.

2. Trans youth rights are under attack

In recent months, including here in Texas, a slew of anti-trans bills have been introduced across America that would limit access to health care for trans youth. In 2020, 15 states introduced legislation that would ban or even criminalize access to healthcare for trans youth. In 2021, Arkansas became the first state to pass such a bill into law. HB 1570 bans gender-affirming care, making it illegal for clinicians to provide puberty blockers and hormone therapy. According to the Human Rights Campaign, nearly 100 other anti-trans bill are being considered in state legislative sessions. The bills differ in some respects – some would ban trans women and girls from competing on sports teams consistent with their gender identity under the fallacious claim that they are “protecting women’s sports,” while others would give care providers the right to deny a trans patient care based on moral or religious grounds. In Texas, one bill sought to classify providing gender affirming health care to transgender minors as child abuse. Other legislation would allow taxpayer-funded foster care and adoption agencies to discriminate based on a person’s sexual orientation or gender identity – even as LGBT young people are overrepresented in child welfare systems. All of these bills have one major theme in common: their attempts to stop trans youth from living normal lives.

Gender describes an internal sense of self. Exploring gender is a part of normal development, and gender diversity is to be expected. This means that pediatricians and other care providers can and should be asking all children and youth at developmentally appropriate points about their gender as part of normal care. Pillars of patient-centered, consent-based care include social affirmation, such as supporting one’s choice to change names, pronouns, or their gender expression through hairstyles, clothing, and shoes; legal affirmation, like changing gender markers or names on birth certificates, social security cards, and drivers’ licenses; medical affirmation, including puberty blockers and hormone therapies; and surgical affirmation, which can include chest/breast removal or augmentation, hysterectomy, phalloplasty, vaginoplasty, and facial feminization. Crucially, we must remember that all different kinds of affirmation are completely up to the individual patient, and providers should support their patients without making assumptions about the kind of affirmation they want or need.

Ultimately, kids who are safe and loved at home tend to do well. Kids who have to hide who they are from their parents or who are refused by their parents tend to suffer. Care providers can play a crucial role in normalizing gender diversity and modeling this perspective around kids and their families.