This post is part of the Hogg Foundation’s “3 Things to Know” blog series, which explains concepts influencing community mental health and our grantmaking. Check out others in this series: Trauma-informed Care, Recovery,  Healthy Equity,  Social Determinants of (Mental) Health,  Resilience and Well-Being. 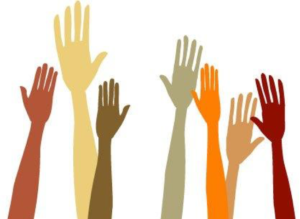 Most people are familiar with the concept of being humble. To be humble is to demonstrate “humility,” which is commonly defined as “freedom from pride or arrogance.” What, then, might it mean to practice “cultural humility,” a phrase often seen in areas related to mental health care and social advocacy?

The National Institutes of Health (NIH) defines cultural humility as “a lifelong process of self-reflection and self-critique whereby the individual not only learns about another’s culture, but one starts with an examination of her/his own beliefs and cultural identities.” The term was first coined in 1998 by healthcare professionals Melanie Tervalon and Jann Murray-García, who originally described cultural humility as a tool to educate physicians to work with culturally, ethnically, and racially diverse populations in the United States. The concept, however, carries meaning for any clinical researcher or social advocate who is studying and/or working with someone different from themselves – in terms of race, ethnicity, gender, religion, sexual orientation, socioeconomic status, or geographic location – in any cultural context and in any part of the world.

Here are three things to know about cultural humility:

1. We move between several different cultures – often without even thinking about it.

Though the term “culture” is often used when describing different ethnic or religious affiliations, most people experience and participate in different cultures just by moving through their daily lives. For example, a person’s family or home culture will likely have distinctly different qualities and behavioral expectations than their work culture, school culture, or social group culture. Because the overall purpose of practicing cultural humility is to be aware of one’s own values and beliefs, it is important to understand that those notions come from the combination of cultures that people experience in their everyday lives. A person cannot begin to understand the makeup and context of another person’s life without being aware and reflective of their own background and situation first.

2. Cultural humility is distinct from cultural competency and reflexivity.

It is important to know the differences between cultural humility and closely related concepts like cultural competency and reflexivity. Cultural competency is a tool for leveling imbalanced patient-provider power dynamics. The shortcomings of this practice, however, have been identified by researchers who reviewed frequently used cultural competency measures. They found that in many frequently used competency measures, whiteness was understood and represented as the norm. Cultural incompetence is then framed as being due to a lack of knowledge about the ‘other.’ In short, the goal of cultural competency is to learn about the other person’s culture rather than reflect on one’s own background. Reflexivity, on the other hand, calls on researchers to explore their own personal beliefs in order to be more aware of potential judgements that can occur during data collection and analysis. It is the research practice of placing oneself within the experience of the participant and then examining the participant-researcher relationship. But even reflexivity falls short of the lifelong process of self-reflection that is synonymous with cultural humility.

It is not enough to think about one’s own values, beliefs, and social position within the context of the present moment. In order to practice true cultural humility, a person must also be aware of and sensitive to historic realities like legacies of violence and oppression against certain groups of people. For example, the Public Health Service’s Syphilis Experiment at Tuskegee serves as a tragic reminder of how African Americans have been historically deprived of adequate healthcare and have experienced abuse and disrespect in the name of clinical research. The history of mistrust between vulnerable populations and public health institutions has led to understandable skepticism about the purpose and outcomes of research. In order to build trust, the historic, systemic reasons for mistrust must be excavated and made visible. These reasons include the history of slavery, racism, segregation, and more recent lived experience of disrespect at the hands of healthcare providers. By recognizing the failures of the past, researchers, clinicians, providers, and advocates can all contribute to building a better future that is founded in practices of cultural humility.