“I believe that being a trans person is a revolutionary act, but to be less than who you are is a slow death,” Shane Whalley says. “You have to do it, and you have to find the support to make it possible.” 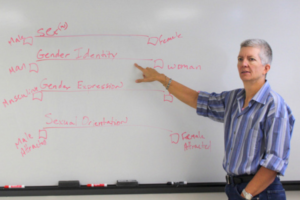 June is Pride Month—a time to celebrate the millions around the world who identify as gay, bisexual, transgender, queer, intersex or allied* (LGBTQIA). It’s also a time to acknowledge the violence, discrimination and mental health challenges that members of the LGBTQIA community face.

With its lack of legal protections and a stigmatizing political climate, Texas falls in the bottom quarter of rankings for support and acceptance of its nearly one million LGBTQ+ youth and adults. Shane Whalley (pronouns: ze/hir/hirs), the guest on this episode of our Into the Fold podcast, is a genderqueer social worker and educator who facilitates “deeply relational and playful” workshops on LGBTQIA issues using a social justice approach.

As explained in this Psychology Today article, “A [genderqueer] or nonbinary person is someone who feels that their felt gender doesn’t fit with socially constructed norms for their biological sex. This may be in terms of their thoughts, feelings, behaviors, and, most importantly, their gender identity.”

Becoming a “Mirror for Others”

From a young age, Whalley knew that boys clothing suited hir more than the hats, dresses and “little white gloves” ze wore to church every Sunday at hir mother’s request. But hir early desire to be masculine-presenting challenged the teachings of the “girl rulebook” that dictated gender norms in small-town southern Indiana.

“I’d been told that if I didn’t conform, I wouldn’t be successful,” Whalley says. “That was the threat my parents made.” The pressure to give up a pursuit of authenticity for the sake of social acceptability—not to mention an initial lack of parental approval and support—took a toll Whalley’s mental health and self-esteem.

Moving to a progressive college town did much to put Whalley at ease, but it wasn’t until a fateful visit from the late author and “transgender warrior” Leslie Feinberg that the radical act of self-love became a tangible possibility. Feinberg, who radiated confidence and “dressed to kill,” gave Whalley a “mirror for what it could look like to be a female-bodied, masculine-presenting person.”

“It also made me realize that I wanted to be a mirror for others the way Leslie had been a mirror for me,” Whalley says. Feinberg’s example laid the groundwork for what would become Whalley’s career as a “professional queer” and “full-time social justice educator.” Before moving to Austin, Whalley delivered classroom talks and attended workshops to sharpen hir knowledge of social justice frameworks. Ze went on to earn hir Master of Science in Social Work at The University of Texas at Austin, where ze has taught at the Steve Hicks School of Social Work since 2003.

Feinberg’s example also helped Whalley and hir mother find common ground. “My mom realized I wasn’t successful despite who I was—I was actually successful because of who I was,” ze says. “I don’t think she had thought that was possible.”

A Revolutionary Act of Support

Gender identity and sexual orientation aren’t federally protected classes in the United States. Community-building is crucial for the mental health and well-being of the country’s LGBTQIA population. In Texas, a wave of discriminatory legislation is currently threatening the civil liberties and protections of LGBTQIA residents.

Building on the words of actress Laverne Cox—who called “loving trans people” a “revolutionary act”—Whalley says, “I believe that being a trans person is a revolutionary act, but to be less than who you are is a slow death. You have to do it, and you have to find the support to make it possible.”

To fight injustice, Whalley believes all oppressed communities need allies or “co-conspirators” that are active in the struggle but also willing to create space for leadership by the most marginalized. “For me, allies are willing to take the same risks that I do,” Whalley says. “They’re willing to speak up in spaces so I don’t have to, or they’ll do it with me.”

Thanks to the internet and social media, members of the LGBTQIA community have more opportunities for connection and information than Whalley did in hir youth. Role models can utilize digital platforms and networks to increase their visibility and amplify their voices—helping the “young folks who are coming up” feel less alone.

“When I felt insecure in myself, it gave people room to doubt me, which made room for me to doubt myself,” Whalley says. “The less I doubt myself, the more accepted and more loved for who I am that I’ve been.”