The sense of agency and purpose that results from finding and asserting one’s voice is essential to a healthy sense of self. And in this way, social activism has a powerful impact on one’s mental health and well-being.

In recognition of Women’s History Month, Episode 130 of Into the Fold explores this meaningful connection between activism and mental health through the lens of the early Women’s Movement of the 1960’s and 70’s. Drawing from the archives of the Hogg Foundation’s The Human Condition radio broadcasts, we feature an interview with Sarah Weddington, who just recently passed away in December of 2021. Best known for her role as the successful litigator in the landmark Supreme Court decision of Roe v. Wade, that led to the legalization of abortion, Weddington continued advocate for a wide variety of women’s rights throughout her career.

Don’t have the time for full podcasts? Check out our YouTube series Three Things to Know.

Although abortion is not an issue directly related to the Hogg Foundation’s mission, the high court’s ruling that the United States Constitution provides a fundamental “right to privacy” that protects a woman’s right to choose whether to have an abortion did have significant ramifications on the well-being of women in Texas and beyond.

In her conversation with Bert Kruger Smith, former Hogg Foundation program officer, Weddington discusses Roe V. Wade and her continuing work on behalf of women as a Special Assistant to President Jimmy Carter.

Providing additional insight and commentary on the history of women’s activism in Texas is podcast host and Hogg Foundation Communications Manager, Ike Evans, and Dr. Laurie Green, associate professor in the Department of History, the Center for Women’s Studies, and the African and African Diaspora Studies Department at the University of Texas at Austin, and director of the Austin Women Activists Oral History Project. As a historian, she studies social justice movements in the mid-20th century United States, with a particular focus on movements involving poor and working-class women, Blacks, and Latinas/os and brings thoughtful insight to the discussion of women’s social activism in Texas and its capacity for empowerment.

A Vision for the Future 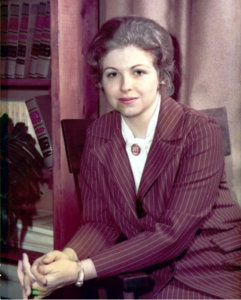 By the time of her appointment to the Carter administration in 1976, Weddington had already argued Roe v. Wade and served as a member of the Texas Legislature.

While at the White House, her advocacy for women addressed a variety of concerns of the time ranging from educational and employment opportunities to income equity, childcare, poverty, international women’s issues, marginalized communities, protection of Roe v. Wade, Social Security, and the Equal Rights Amendment.

At the same time, Green recognizes that Weddington also had a broader vision– one that extended beyond specific women’s issues and beyond the immediate needs of the present.

“(She had) a vision for a better future,” says Green. “And I think this vision is the basis for the idea of choice… and the idea that women could develop as they wished, in their unique diverse ways, without having legal barriers in front of them.”

In part, Weddington’s vision for a better future emerged from an environment of student activism at the University of Texas, of women facing challenges together through consciousness-raising as well as action.

Having had an abortion herself, she empathized with the student-led Birth Control Information Center, founded by women for women as a resource for obtaining birth control as well as help finding safe abortions. It was in conversation with these women that she was urged to file a case for legalizing abortions at the federal level.

“So much happens among young women who don’t have the fear to take things on, who are so idealistic,” says Green. “It’s inspiring.”

Green views women’s resilience and desire to make change in society from two perspectives related to mental health and well-being – making a change in oneself and making a change by coming together with others to make a difference.

“These women were facing some real difficulties … but when they came together as a group and weren’t dealing with difficulties alone, [their activism] actually did make a difference,” says Green. “That’s very relevant to mental health.”

The Needs of Women in Poverty

“Weddington is calling out [these parallels] … and talking about what can be done to help women living in poverty [in the U.S.],” says Green. “The fact that [she] continued to be so sensitive to [the need to empower women in poverty] is one reason I’m really proud to be talking about her.”

In keeping with the empowering nature of activism, Weddington concludes her conversation with Smith by offering advice on supporting women’s issues both individually and collectively.

“The first thing is to have a personal concern – to be informed, educated, and to express concern about [women’s] issues,” Weddington said. “Second, I think as we as individuals become stronger in our personal and professional lives, we have the ability more to contribute to [solutions]. And third, we need a real feeling of responsibility. Those of us who have been fortunate enough … to reach a new level of development and personal satisfaction, have a real responsibility, in turn, to help pull those behind us up.”

Indeed, Weddington’s lifetime of activism clearly reflects her willing acceptance of this responsibility. She did not stop working after finding and asserting her own voice, instead she left a legacy of advocating on behalf of the well-being of other women, empowering them to find their own voice.

Listen to this and other episodes of Into the Fold on Apple, Google, Spotify, Stitcher, or wherever you get your podcasts!