From the Archive: Efua Sutherland on Theatre, Literature and Self-rediscovery

“The image of the book is a self-image. You open a book and it is about you, not always about other people.” – Efua Sutherland 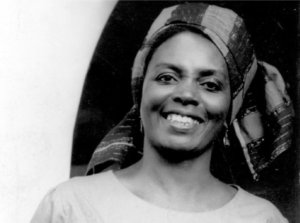 Historic Women of the Hogg Foundation

March is Women’s History Month, and as we honor the accomplishments of historic women from around the world, we also celebrate the contributions of those women whose impacts we feel on a daily basis here at the Hogg Foundation. Some names, like Bernice Moore of the Harry E. and Bernice M. Moore Fellowship, Frances Fowler Wallace of the Frances Fowler Wallace Memorial Award, and Ima Hogg of the Ima Hogg Scholarship (and, of course, the Hogg Foundation), are quite familiar to those of us who are privileged to work in service of their legacies.

In this episode of the podcast, we hear from three women whose names may be less familiar but whose stories and contributions to the history of the Hogg Foundation (and the world) are nonetheless worthy of celebration.

First, we hear from Bert Kruger Smith, the longtime host of the Hogg Foundation’s Human Condition radio series, and her interview guest, Efua Sutherland, the famous Ghanaian playwright, director, researcher and children’s rights advocate. Following that, we hear from a former employee of the Hogg Foundation, Linda Swan-Adkins, whose eye-witness testimony of the tragic 1966 UT tower shooting represents an important piece of Texas history.

Efua Sutherland (1924-1996) is a giant in her native country of Ghana, Africa. Her work as a playwright, poet, teacher, and children’s author made her one of the most prominent creative figures in Ghanaian history. She joined Bert Kruger Smith on the Human Condition radio series to discuss her role in developing the modern literary tradition of Ghana.

“My purpose is to help develop the literature of my country,” Sutherland told Kruger. “We need to do this in the process we are in of self-rediscovery, building up our sense of our own identity and putting this out in every direction we can, through education and through the theater, etcetera.”

Sutherland speaks about how this “rediscovery” was necessary across much of Africa during the Independence Era, when African nations were finally able to gain freedom from European colonization, between 1957 and 1970. The legacy of colonialism meant that many African children grew up in a world where books were imported objects. Without having written books that reflected their own experiences, children struggled with their own concepts of self. As Sutherland put it, “The image of the book is a self-image. You open a book and it is about you, not always about other people. Educationally, it is absolutely necessary to make an effort to give our children that kind of a book, because they have been fed another thing for too long, and it does do damage to one’s sense of one’s self.”

Of course, Ghana and other African nations do have rich histories of literature in forms that transcend the written word. This includes a wealth of verbal art such as folktales and legends, whose lessons and values are transmitted through the practices of daily life, like telling stories and singing lullabies. Sutherland has recorded much of this rich history, capturing the sounds of these stories that exist outside of written literature, preserving them in a way that ensures future generations can experience them.

In 2017 the Hogg Foundation reached out to former employee Linda Swan-Adkins with a similar goal of capturing a precious piece of our shared cultural history via audio recording. In Swan-Adkins’s case, we captured her first-hand account of witnessing the 1966 shooting from the UT Tower. Featured in a 2017 Into the Fold episode, Swan-Adkins’ recounting of that horrific day sets the scene for a crucial conversation about mental health, student safety, and larger questions of trauma, tragedy, and injustice.