Consumer Voice: Its Role in Diversity, Equity and Inclusion

“If we truly believe that people have the ability to recover,” Tammy Heinz says, “then we can provide that hope and we can hold it for them while they don’t have it.” 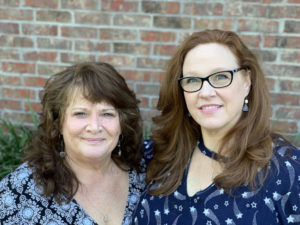 Historically, the mental health system, and the conversation surrounding it, has given more value to the expert opinions of providers and clinicians than the experiences of those living with mental health conditions. Today, elevating the visibility of the latter has become an urgent priority of mental health organizations, institutions, and leaders who recognize the many advantages of giving mental health services consumers more autonomy and authority in the mental health space.

About a decade ago, the Hogg Foundation hired its first two consumer and family liaisons, Stephany Bryan and Tammy Heinz. As program officers, their passion and perspective has proved invaluable to making the foundation bolder and more inclusive in its grantmaking strategy. To celebrate their ten-year anniversary with the foundation, this episode of our Into the Fold podcast explores the consumer movement from the ground up—with Bryan and Heinz as our guides.

The original mental health consumer movement, which unfolded over the course of the 1960’s and 70’s, was spearheaded by activists who mirrored the Civil Rights Movement’s principles of self-definition and self-determination. Because many had endured forced institutionalization and other invasive psychiatric practices typical of the time, they relied on a common identity of survivor to make these injustices visible.

As mental health services and supports began to move away from a stigmatizing “disease model” in the decades that followed, individuals living with mental illness more readily identified as patients. According to Heinz, this fundamental yet evolving emphasis on self-determination motivated the eventual usage of “consumer” as a term that signals, to service providers and users alike, the existence and expectation of choice. “They moved from defining themselves to setting their own priorities,” Bryan says.

The growing belief in the agency and strength of consumers eventually formed the impetus for the recovery movement, which promotes the concept of recovery as the “process of change through which individuals improve their health and wellness, live a self-directed life, and strive to reach their full potential.” Recovery-oriented language and interventions continue to shape the present mental health landscape. “We never had this idea that we could live our best lives,” Heinz says. “It was always this idea that maintenance was our goal.”

For Bryan, orienting her role as a mental health professional with her lived experience of recovery is more than a “strengths-based way” of contesting stereotypes and reframing dialogues around consumers. “I do believe that it inspires hope and encourages others who have similar lived experiences to seek and receive the recovery supports that they deserve,” she says.

Incorporating the Consumer Voice at Hogg

When Heinz and Bryan first arrived at the foundation, they had to strategically navigate responsibilities, expectations and conversations that, despite good intentions, had previously been void of consumer insight. “It was a constant balancing act — trying to figure out how to fit in, but also how to disrupt the milieu in a way that would move us or advance us forward,” Heinz says.

In the ten years since, however, dialogues have adopted the language of recovery and thus become more inclusive and daring—in no small part due to the initiatives Heinz and Bryan have led as program officers. For example, through a memorandum of understanding with Texas Health and Human Services, Heinz began a relationship with Via Hope, a training and technical assistance center that dedicates capacity to developing a peer workforce, and Bryan served as the coordinating program officer for the East Texas Coalition for Mental Health Recovery, a leadership network of peer specialists and consumers that operates in one of the most underserved regions in Texas.

Ultimately, the foundation’s mission to advance recovery across the state planted the seeds for its current strategic vision, which imagines a future in which consumers and their communities can truly thrive. “We will continue to have courageous conversations to help us learn our way to solutions together,” Bryan says.

“Someone was able to hold out hope for me when I didn’t have it,” she says, “and now I feel this very strong, intense desire to hold that for other people when they don’t have it for themselves.”