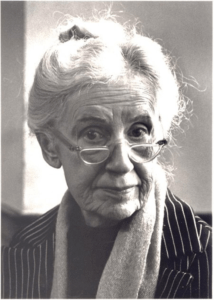 In recognition of Women’s History Month, we are reaching into our archives to share a conversation between two history makers: Bert Kruger Smith and Maggie Kuhn. In this 1979 episode of The Human Condition, a radio series produced by the Hogg Foundation that ran from 1971 to 1983 on KUT, the show’s host Bert Kruger Smith interviews Maggie Kuhn, an American activist who founded the Gray Panthers movement in 1970. Their conversation puts at center stage the agency and creativity of older people, and addresses the challenges of organizing and mobilizing a specific community for the sake of doing effective advocacy — challenges that still ring true over forty years later.

Maggie Kuhn was the first to admit her coalition’s original name wasn’t great. “I hesitate to give it to you, our former name, it’s so unimaginative and so square. It was the Consultation of Older and Younger Adults for Social Change — isn’t that awful?” Not as good as the Gray Panthers, Kruger Smith agreed, a name which was given to Kuhn and her alliance by a radio host in New York City. The Panthers loved the new moniker and quickly adopted it. “It really connoted the kind of radical view of ourselves and of our later years that was in line with our purpose,” says Kuhn.

Using the only Xerox machine at her work, Kuhn had written a memo raising a question to about 150 people in her community who had retired or were about to: what are we going to do with the rest of our lives? The manifesto proclaimed that their generation still had things to do in the world, and that they could not possibly give up. It raised a call to action to older people to use their new freedom to make real social change.

“The issue that we decided we wanted to devote time and energy and experience to was the war in Vietnam,” Kuhn said. “We hated the war. We knew that it was illegal and immoral. We decided that our job was to stand with the young people — the young who were being drafted, the young who were resisting the draft, and the young whose lives were being destroyed by that horrible war.” By 1979, the Gray Panthers had expanded to include about 50,000 members across the country, and 110 different groups, including one in Austin that was, at the time, “relatively new, but vigorous and growing.”

Old People Should Be Futurists

One of Kuhn’s most radical-sounding ideas was that old people should be futurists. “We have an advantage in looking over the past and viewing the present and the future from a historical point of view,” Kuhn explained. “My generation has witnessed extraordinary social change. Out of that human experience, over a 70-year lifespan, we have some intimations — not an absolute crystal ball — but very clear perceptions about what the future may be.”

Among Kuhn’s priorities for the future were finding new ways to settle international disputes outside of war, establishing a new health care system in the U.S. that focused on prevention and wellness, and redefining concepts of family.

Jobs Left to be Done

Kuhn believed there was work left to be done in the world that older people were actually more suited to do than others. “Old people have the time,” Kuhn explained, ”particularly if they’ve left their jobs, to monitor what is going on in public bodies, to watch the courts, to watch when city councils and townships meet, and say I say, become watchdogs and watch-bitches, complaining and barking the way watchdogs do when public safety is violated.”

Kuhn’s zest for life and dedication to her cause came from a deep sense of purpose, which she described in the following way: “You have to have a purpose, and the purpose is larger than you are. It’s something that encompasses your neighbor, and is something you can do with and for your neighbor.” She said older people need to realize that they still have a lot to give. “When we use our age as an excuse for not being involved, we’re copping out.” Finally, Kuhn said older adults have to connect. “We have to stop just limiting and restricting our ideas and associating only with people who are like us. We have to begin to reach out, particularly to the young, and to find ways in which we can, with them, be agents of social change, working for a just and human society.”