Asian American Identity in the Time of COVID-19 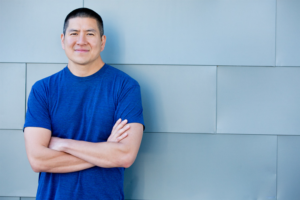 This week we are joined by Dr. Eric Tang, Associate Professor of African and African Diaspora Studies and Director of the Center for Asian American Studies at The University of Texas at Austin. We discuss COVID-19 and Asian Americans, especially now that the pandemic has brought to the forefront many of our nation’s deep xenophobic biases that harm Asian people of color in the United States, including here on the University of Texas at Austin campus.

The “Racial Location” of Asian Americans

Where do Asian Americans fit within the complex division racial categories in the U.S.? “I think there is a struggle among Asian Americans to figure out their racial location,” says Dr. Tang. “Are they people of color in ‘the same way’ as African Americans and Latinos, who are dealing with economic inequality compounded by environmental inequality – such as housing segregation and environmental racism – or are they people of color of a different sort, because, according to census data, they tend to do better economically, they tend to have higher educational achievement? Are they closer to white because of that? That’s a question that many Asian Americans struggle with.”

Despite the data and the metrics, Dr. Tang explains that culturally, Asian Americans can still never be white, because whiteness is already predicated on “othering” Asians. “We have a history of tethering citizenship to whiteness, and Asians have been excluded from migration and citizenship for the majority of U.S. history.” This is just one of the reasons why Dr. Tang says Asian Americans today may feel like they are racialized as “perpetual foreigners.”

Anti-Asian Racism during the Pandemic: “A Change in Same”

The pandemic has highlighted historical racisms against Asians and, in some ways, has renewed them. “We might think of what’s happening to Asian Americans and the discrimination they face in the wake of – or rather, in the present of – the pandemic as a ‘change in same’,” says Dr. Tang. He points out the similarities between the xenophobic language of the pandemic, such as the term ‘Chinese virus,’ and, for example, the historically racist term ‘Yellow Peril,’ which came out in the late 1800s, along with other examples of times when Asians have been framed as a kind of a virulence on American society.

But as much as this anti-Asian racism is “the same,” circumstances for Asian Americans have also changed. “We are dealing with a much larger Asian American population today than existed in other periods when Asians experienced discrimination,” explains Dr. Tang. “As a result, there could be a more robust response – an anti-racist response – against that kind of racism.”

Opportunities for Unity and Mutual Support