Refugee Resilience and Well-being: A Voice from the Field 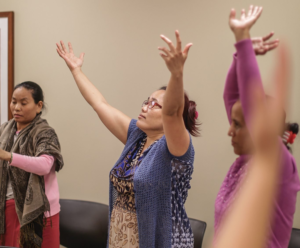 In 2019, the Trump administration lowered the U.S. refugee admission cap to just 30,000, a historic low. The current situation of refugees in the U.S. is defined by the increasingly hostile and xenophobic political climate, the popular conflation of refugee admission with illegal immigration, and federal rules that keep changing. Even at the historically low cap set by the Trump administration, the rate of successful resettlement will almost certainly fail to keep pace with the need.

Our guest for this episode of Into the Fold, Dr. Sophia Banu, psychiatrist and founder of the Clinic for International Trauma Survivors in Houston, Texas, sheds light on the emotional needs of this population, the standout characteristics of the people she works with, and what others can do to help.

The United Nations High Commissioner for Refugees (UNHCR) defines refugees as displaced persons who are unable to return to their country of origin “owing to serious and indiscriminate threats to life, physical integrity or freedom resulting from generalized violence or events seriously disturbing public order.”

Most people can picture a refugee. But few can imagine just what a long, drawn-out process refugee resettlement really is.

“I give this kind of talk a lot, and I’m surprised when I ask [people], ‘what do you think resettlement means and how long does it take?’” said Banu. In her telling, people’s assumptions about the process are far wide of the bureaucratic reality.

“UNHCR will do iris scans, biographic data, facial scans, before the U.S. or Canada or Australia will say, ‘Okay, I want to resettle 20 people from Bhutan, or 30 people from Syria’,” said Banu, describing a typical case. She described a labyrinth of background checks and in-person interviews before a refugee will even be permitted to land in Houston to be assigned a resettlement agency case manager. The entire resettlement process can take from two to 20 years, said Banu.

Banu described the experience of working with Bhutanese refugees in Nepal only to have them arrive at her clinic a full 20 years later, having just completed their resettlement journey.

“Some of the refugees that I see in my clinic, they were born in the refugee camp, and that’s all they’ve ever known before coming to the country of resettlement,” said Banu.

At the Center for International Trauma Survivors Banu trains psychiatry residents, medical students and child psychiatric fellows. Much of her work is instructing her charges on the importance of adopting a person-centered mindset. This means not just an eye for symptoms, but for the trauma and upheaval that is characteristic of the refugee experience.

Against this backdrop of profound disorientation, Banu stressed the importance of allowing refugee clients to regain a sense of control.

“At the end of the day, it is the relationship you have with the person sitting in front of you that is your most important healing tool,” said Banu.

But the refugee story is not solely one of suffering and reliance on the charity of others. Despite their adverse circumstances or even because of them, refugees can teach us a lot about resilience. Banu’s own experience bears this out.

“When I’m with refugees, in session with them and when I hear the stories of what they’re doing and how they’ve overcome, they make me stronger,” said Banu.