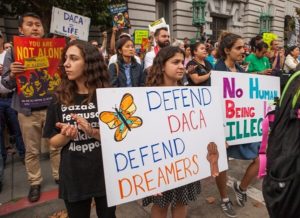 Congress is set to take action on the Deferred Action for Childhood Arrivals (DACA) program on March 5, 2018. Unless legislative priorities shift to bring about a decision earlier in the term, that date will determine the fate of the nearly 800,000 youths, or “dreamers,” that DACA protects from deportation.

Until then, those young adults are consigned to legal limbo—living, studying and working with little to no certainty of what the future holds. The shadow of deportation threat in the U.S. extends not just to DACA recipients, but 11 million undocumented immigrants and their families as well.

In 2015, we sat down with Dr. Luis Zayas, the dean of the Steve Hicks School of Social Work at The University of Austin, to talk about his research on children of the undocumented and the psychological toll of deportability. For our latest episode, we invited Dr. Zayas back to discuss deportation anxiety in light of DACA’s uncertain future.

The Many Faces of Deportation Anxiety in Children

To create a framework for observing and measuring deportation anxiety, Dr. Zayas studied three groups of children. The first group moved to Mexico when their parents were deported, while children who stayed behind in the U.S. made up the second group. The third group represented the “average condition” of U.S.-born citizen children—those living in the country with parents who are undocumented, but face no deportation proceedings.

According to Dr. Zayas, children who left the U.S. for Mexico experienced a “great disruption” when severed from the educational and health services to which they had become accustomed. The sense of rupture, combined with additional safety and social concerns, made the children more vulnerable to depressive symptoms.

“The older children could anticipate that one day, they would return to the U.S. to go to college,” Dr. Zayas says. “The younger kids saw that future at a greater distance, and they were perhaps the most impacted.”

The second group, those who stayed behind in the U.S. when their parents were deported, suffered from a persistent “sense of loss” of their parents, even if children maintained contact with them via phone or Skype. “[They] were simply not able to know what was happening in their parents’ lives—in the way they could if they were physically present,” Dr. Zayas says.

Though the third group of children lived with their parents in the U.S., the threat of deportation still made for a precarious living situation.

Dr. Zayas offers examples of the thoughts that children must endure when the threat of deportation looms. “Will Mom or Dad get home from work today?” he asks. “Will I see them, or will they be picked up by the police, detained and deported?”

The perspective of DACA “Dreamers,” on the other hand, differs in that many belong to mixed-status families, or families comprised of undocumented parents, undocumented but DACA-eligible youth, and younger U.S.-born citizen siblings. At a certain point in their lives, DACA youth learn they are not U.S. citizens.

“Their situation is made worse by the current atmosphere, which is leaving them suspended as to what is going to happen, but fearful that the worst could come about,” Dr. Zayas says.

Behavioral health professionals can help alleviate the deportation anxiety of DACA youth and their undocumented family members. Dr. Zayas suggests providing families with guidance on how and when to inform DACA-eligible children about their status, and by helping those children prepare for stressors and process trauma.

“We need to help families develop safety plans,” he says. “Giving your children instructions…as to what they should do in the event that Mom or Dad, or both, are detained.”

Dr. Zayas goes into further detail about the lives of children of undocumented immigrants in his new book, Forgotten Citizens: Deportation, Children, and the Making of American Exiles and Orphans. The book draws heavily from his extensive research and clinical practice to inform the general public of a phenomenon that will only grow more relevant in years to come.