“I think it’s very important that people like you and me communicate to DACA recipients that [they] are not alone,” Sebastian Colon-Otero says. “We support you, I am here for you—let’s work together.” 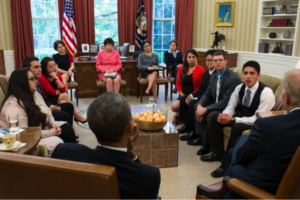 The University of Texas at Austin stands by students protected under Deferred Action for Childhood Arrivals (DACA). The Forty Acres, however, can’t shelter them from external pressures that, due to a slew of contested policy actions and interminable media coverage, show no signs of letting up soon.

Sebastian Colon-Otero, counselor at the The University of Texas at Austin Counseling and Mental Health Center (CMHC), unpacks this reality in this week’s podcast episode, outlining what those in his position can do to help DACA recipients, or Dreamers, feel valued, supported and safe.

Making Validation and Safety a Priority

The DACA students that Colon-Otero meets through CMHC report psychological symptoms that, in terms of variety and intensity, exceed the diagnostic limits of an anxiety synonymous with general stress or unease. “This is a condition of a social context,” Colon-Otero says. “That’s the definition of trauma—when somebody experiences a threat to their life, directly or by witnessing.”

Common to many is an acute stress reaction—either borderline with or constitutive of post-traumatic stress disorder (PTSD)—to the cloud of uncertainty obscuring DACA’s legislative future. The heightened instability of the day-to-day, combined with routinely unsettling broadcasts of political irresolution, harms DACA students’ capacity for functioning.

“Because there is no certainty, no clarity of what’s next,” Colon-Otero says, “it’s living with this notion—is it worth it to go to class? Is it worth it to try for a better future for myself?”

According to Colon-Otero, counseling sessions at CMHC can address the mental health conditions of DACA students by providing them with two crucial takeaways: affirmation of their self- and societal worth, and knowledge of the resources they have at their disposal. “A healing conversation includes reassuring, first, that the reaction is real, normal and valid,” he says. “And second, to work together to explore how to increase, within the limitations, a sense of safety.”

The limitations that must be negotiated by both student and counselor are largely legal and outside the bounds of either’s control. Given these conditions, increasing a sense of safety might entail creating an emergency plan or, on a broader level, collaborating with staff and faculty members to make accommodations for DACA students.

DACA Students: “Intrinsic” to Our Communities

In addition to counseling, Colon-Otero also acts as the diversity coordinator at CMHC for the Latinx community. An extensive background in serving and working with oppressed populations informs his approach to creating safe spaces outside traditional therapeutic settings.

“One thing we learn in the process is that sometimes the systems in place to provide services around mental health are not built to be fully inclusive of the realities of marginalized communities,” Colon-Otero says. It’s with this in mind that he runs a group where Latinx students—regardless of documented and undocumented status—can meet without the underlying feeling of suspicion one might feel in “official” environments.

“In that space, I try to offer support and information in a way that feels safer for a lot of students,” Colon-Otero says. “We don’t collect names or information, and we do workshops outside of the center in order to reach them where they are.”

To those that oppose DACA on the grounds of protecting American markets or values, Colon-Otero wants to make one thing extremely clear: that the contributions of Dreamers are not only valuable to education institutions like UT, but also to society at large.

“The cost of not having them is on us,” Colon-Otero says. “We’re talking about young people who, by default of the social circumstances, have had…a life of being outstanding, and being above and beyond the basic level of productivity and creativity.”

Jeopardizing or revoking the ability of DACA recipients to continue studying, working and living in the United States does more than squander their individual potential. Their absence would rupture the extensive networks of friends, families and communities that hinge on their participation.

“Every DACA person I have met is highly invested and connected to their community here,” Colon-Oltero says. “It’s the only community they know.”