From the Archive: Dr. Raul Hilberg on the Holocaust

“Awareness or knowledge can be extremely partial, and there are mechanisms by which people attempt not to face the implications of certain kinds of knowledge.” 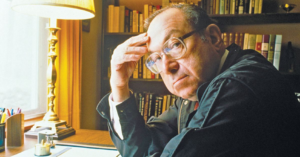 In observance of International Holocaust Remembrance Day on January 27th, this episode of Into the Fold features an interview from a late 1970s episode of the Human Condition, a radio series produced by the Hogg Foundation between 1972 and 1983. Longtime host of the Human Condition, Bert Kruger Smith, speaks with eminent Holocaust scholar Dr. Raul Hilberg, who died in 2007, about the conditions that led to the Holocaust and what happened in the minds of the people committing atrocities in the name of the Final Solution to the Jewish Problem.

The Destruction of the European Jews

January 27th marks the 75th anniversary of the liberation of Auschwitz, the infamous Nazi deathcamp, by the Soviet Red Army in 1945. The day was designated as International Holocaust Remembrance Day by a United Nations General Assembly Resolution in 2005 to commemorate the genocide that resulted in the death of 6 million Jews and 11 million others by the Nazi regime and its collaborators during the Second World War. Few have written as extensively on the topic of the Holocaust as Hilberg, who spent his career considering this cataclysmic event as a political scientist and historian.

While many facts of the Holocaust were revealed following the war, other details have yet to be exposed. “The broad outlines of what happened were known immediately after the event, most particularly when camps were being overrun by Allied forces,” Hilberg explains. “But the story of how these events transpired, the recapitulation of what went on in the minds of the people who made the decisions in Germany, awaits a great deal of scholarship still.”

When talking about the perpetrators of the Holocaust, one must acknowledge that the machinery of the Nazi regime and its campaign of destruction drew from every segment of German life. Diplomats, civil servants, accountants, engineers, physicians, and other specialized people who participated in the highly technical and bureaucratic planning of the Holocaust must be considered as perpetrators. They were not, however, necessarily following an enormous master plan with a blueprint for destruction. “It was a step by step process, and those who were perpetrating it could very rarely see more than one step ahead,” Hilberg explains. “They came to each bridge and crossed it. At some point, of course, they were crossing into virtually new territory – into unprecedented territory. Something that had never happened before was now being attempted.”

Notably, the people who did the planning (i.e. drawing up plans for a camp, getting materials, or scheduling trains) rarely saw the victims face to face. Instead, the SS police force were the ones who dealt with actual killings, which impacted the officers psychologically. To deal with this, killing became more remote. Gas chambers were constructed out of a desire for efficiency and impersonality. They could kill as many as 1,000 people at a time—far less personal than face to face shooting.

One question that Holocaust researchers return to is how to consider the ordinary people who lived in Germany during the Holocaust, who were at least somewhat aware of what was going on. Hilberg and Smith discuss this phenomenon of partial awareness that people are able to engage with when facing something psychologically distressing. “My feeling is that awareness or knowledge can be extremely partial, and there are mechanisms by which people attempt not to face the implications of certain kinds of knowledge,” says Hilberg. “In this particular situation, there was such an attempt at what might be called repression – a withdrawal of sorts from direct contemplation and talk about what was only dimly perceived at the time, but nevertheless indicative of very drastic activity.”

Documents from SS officers written at the time show extensive discussion about means to alleviate the psychological burden of the work they were doing. “It was a recognized problem. You would now call it a mental health problem, but they didn’t have that vocabulary. The talked about the soul being burdened.” Hilberg says that the SS attempted to avoid these mental health issues by insisting and repeating to themselves, “We are decent, we are decent, we must do this.” Heinrich Himmler, chief of the Nazi police, is said to have assured his men, “To have come through all this and remained decent, that is a page of glory in our history.”

This justification of violence is what stands between us and assuring that an atrocity like this never happens again. “You can’t be good in one sector,” Hilberg says, “like the Germans who tried to be good fathers while killing Jews.” Instead, we have to be “humanistic, in every sense of the word.” It is the only way anything as drastic as this can be prevented. “There’s no shortcut.”

From the Archive: Dr. Kenneth Clark on Racism and Child Well-being