From the Archives: Dr. Kenneth Clark on Racism and Child Well-Being

“We will have stability—moral stability—and justice in a society when those who are not the immediate victims of injustice feel as intensely the injustices as the victim himself,” said Dr. Kenneth Clark. 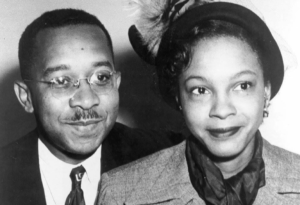 From 1971 to 1983, former Hogg Foundation program officer Bert Kruger Smith hosted The Human Condition, a radio show that, across a span of 400 episodes, engaged a variety of notable guests in wide-ranging conversations on the things that make us human.

In recognition of Black History Month, this episode of our Into the Fold podcast takes us back into The Human Condition’s archives with a 1974 broadcast featuring the late African American psychologist Dr. Kenneth Clark, whose innovative research in child psychology—conducted alongside his wife, Mamie Phipps Clark—played a pivotal role in winning the legal battle against segregation in schools.

Although Dr. Clark’s dialogue with Kruger Smith dates back 45 years, the revelations and insights it contains are by no means irrelevant to modern-day conversations about race, discrimination and health equity at the community and systems level and in everyday life. In fact, its takeaway messages are more central to the Hogg Foundation’s mission than ever.

The Impact of Internalized Racism on Children

In 1955, Dr. Clark published Prejudice and Your Child, the first book of its kind about the relationship between the moral and ethical conflicts generated by systemic racism and the well-being of children. The book summarized findings that he used as expert testimony in Briggs v. Elliot, one of the cases that eventually led to the 1954 Brown v. the Board of Education Supreme Court decision outlawing school segregation.

“The American pattern of racial prejudice and segregation,” Dr. Clark found, “did affect the personality development, the self-image, the sense of personal worth of not only minority children—rejected children—but…privileged children, the white children who are supposed to be the beneficiaries.”

Rather than mimicking without question the prejudiced behaviors and attitudes exhibited by their parents, white children develop, according to Dr. Clark, a “deep sense of guilt” for being “accessories to unfairness” and, at times, “cruelty.”

For children of color—who don’t just bear witness to such cruelty but are its target—the guilt internalized by their privileged peers is matched by their own “sense of unworthiness” which is just as potent, if not more so. “They begin to incorporate in their own image of themselves the strong possibility that they may not be more worthy than the deprecation,” Dr. Clark told Kruger Smith.

When Kruger Smith called the internalization of deprecation a “self-fulfilling prophecy,” Dr. Clark wholeheartedly agreed. “Those with the power to reject their fellow human beings,” he said, “impose upon the rejected human being the requirement of accepting the rejection.”

Continuing the Fight for a “Sense of Justice” Today

Although Kruger Smith and Dr. Clark’s dialogue takes place in the context of the mid-1970s, when resistance to mandatory desegregation busing triggered controversy in the South, the consequences of discrimination described are multi-generational by nature—and thus hardly restricted to the past.

The effects of deportation anxiety on children of undocumented immigrants, a phenomenon described by Dr. Luis Zayas in a 2015 episode of Into the Fold, offers one of many contemporary examples.

Still, Dr. Clark and Kruger Smith’s vision of what a better future might look like hasn’t lost its potency or urgency.

“When those who have not been injured become as indignant as those who have,” Kruger Smith said, paraphrasing an adage of Greek philosophy, “we’re moving towards a sense of justice.” Dr. Clark replied, “We will have stability—moral stability—and justice in a society when those who are no the immediate victims of injustice feel as intensely the injustices as the victim himself.”