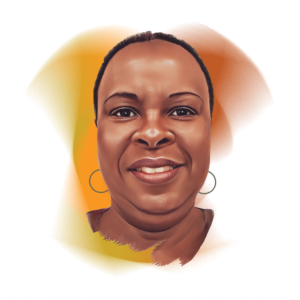 This blog post was authored by Tracy Yvette Green, and is one of the prize-winning entries of the New Voices Showcase. We thank Ms. Green for her submission.

What I remember most were the blinding red and blue lights! At four years old, I was very frightened as a police officer took me from my home. There were so many lights that I could not see anything else other than the officer who put me in the police car. Since they did not look like me, I had no frame of reference for what would come next. Usually during the night, I knew what to expect.

There were many people moving around, but I do not recollect any sounds. As the officer was carrying me, I chose to become invisible. It was not the first time that I had made myself invisible. When I am invisible, nothing bad happens to me– only to the one who could not get away.

Even invisible, the lights still made my head hurt, my stomach churn, and my heart beat hard like I was in deep trouble. I tried to remember what I had done, but I could not think at all. I stayed invisible until the police lights were gone, but why were there doctors now?

There must have been a million doctors looking at my tee-tee (vagina). Another bright light, but white this time. I could not see their faces clearly, but still none of them looked like me. The bright light was warm but not soothing, so again I decided to disappear.

Fast forward 20+ years and I arrive at the emergency room by ambulance due to an asthma event. I ‘disappeared’ again, but not by choice this time. I dissociated, which I later learned is a trauma response brought on by stress. The formal diagnosis is Dissociative Identity Disorder (DID), formerly known as Multiple Personality Disorder.

DID feels like watching a movie of myself from behind a soundproof plexiglass encasement. Uncontrollably, I watch someone else in my body choosing words and displaying behaviors that I never would have. These are not words that I learned in Sunday School!

The White nurse attending to me had displayed microaggressions from the moment I arrived. She did not look at me when she spoke, she seemed reticent to touch me and only when necessary, and she was harsh in her treatment of me. I was becoming angry, but I could not speak because of the breathing apparatus on my face. Then I switched; a term meaning that I dissociated.

I started taking stuff off; the mask on my face, the blood pressure cuff and anything else keeping me there. As if on cue, she pushed a button for assistance and suddenly a White officer arrived with his gun drawn at me. Why had no one rushed in when the nurse was mistreating me? I was immediately perceived as a threat. Why was my dark complexion a threat?

A gun pointed at my face, hospital staff rushing in to give me an injection, and instantly I was unconscious for hours and groggy for two days. When I think of health disparities, I think back to that day. There were no de-escalation techniques offered to me, no counsel or even the opportunity to ask questions about why I was experiencing asthma for the first time.

Fortunately, I lived to tell my story. Sandra Bland, Atatiana Jefferson, Breonna Taylor, Pamela Turner and so many others were not as fortunate. Killings of African Americans, especially males, by police or in police custody began to gather attention in the media. It became traumatic for me each time my husband or I headed out the door.

The ultimate display of racial tension took place on May 25, 2020. That day the world witnessed the heinous murder of George Floyd by police officer Derek Chauvin live on television. I grieved for weeks; for myself, for Mr. Floyd, and formarginalized people everywhere who still had to move around their communities not knowing if they would be safe.

My mental fortitude was unraveling. Yet, I could not stop myself from watching multiple broadcasts of the murder. My fantasy thinking had kicked into high gear believing that if I watched it enough, I could create a different outcome. My thoughts felt normal to me because I always turned to fantasy thinking when I felt powerless.

I, along with everyone else who watched that tragedy, was powerless to help Mr. Floyd. I had been powerless to stop the rape that my fragile, child body endured. This time the powerlessness was due to mental and emotional rape.

I was devastated and felt utterly depleted and violated as a Black person and human being. There were no words to describe my anguish, shock, and lack of comprehension of what I had witnessed. I just wanted to disappear again.

I would have loved to turn into somebody else or been able to go to some place safe at that time. However, people all over the world were experiencing a crisis known as the Coronavirus or Covid-19. Covid-19 was causing an unprecedented number of deaths, family estrangements and job losses.

Despite the virus being universal, minority groups felt the impact of Covid-19 in greater quantities than Whites and non-Hispanic groups. People of color have historically lacked the healthcare opportunities that are provided to their White counterparts. This disproportionality transpires in mental health care also.

Yet, as I have learned, Black people collectively experience fifty million more days of poor mental health attributed to police killings of unarmed Black Americans than any other population (NAACP, 2022). Additionally, Black people are five times more likely to be stopped by police without just cause than White people (NAACP, 2022). As a four-year-old, I misunderstood the intentions of the police officers who showed up to help me that night.

Today I think about Diamond Reynold’s four-year-old daughter. She witnessed her mother’s boyfriend, Philando Castile, killed by a police officer before her incredibly young eyes. What lasting trauma has that created for her? Do the red and blue lights affect her like they did me?

I am no longer the frightened four-year-old child that I once was. The lessons that I have learned and now readily share have created profound change in me. The most important being that life is a journey not a destination. I used to be suicidal, when pain was my lot in life.

I was wrong in my thinking. Earning my Bachelor and Masters’ degrees in the last few years of this journey has taught me the power of resiliency. Steel-like determination, unwavering focus, and never-ending hope are the practices that made me resilient.

Forgiveness is another powerful lesson of mine. The gift of forgiveness is more about me than the other person. Releasing the grief of the past is necessary to embrace the present and make room for the future.

There is also the lesson of flexibility. Whether living with triggers or racism; I am learning to be like the reed in a pond or lake. Bend with the wind and not against it.

Finally, finding humor and joy in the ordinary is equally necessary for a well-balanced life. My continual recovery affords me the opportunity to see the brighter side of things. I have learned to laugh, sometimes at myself. My laughter billows up from me like the rolling of thunder.

The red and blue lights of police cars can still be triggering sometimes. I just remind myself that I am no longer that small child with no power or choices. I have become empowered to be the woman that I was always meant to be!

Tracy Green is an author, mental health advocate and a champion of childhood sexual abuse survivors. Tracy’s life has been forever changed by discovering the love of God, her husband of 38 1/2 years, Jerome, her family, friends, and colleagues.