“One of the things that we tend to do when we talk about state violence is think about it in a quantitative way,” Dr. Christen Smith says. “What I really want to do is disrupt that traditional approach, and really say no.” 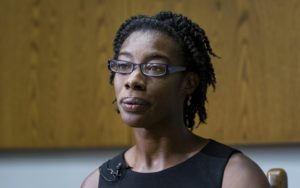 In the conclusion of a special two-part episode of Into the Fold, Dr. Christen Smith, associate professor of African and Diaspora Studies and Anthropology at The University of Texas at Austin, wraps up the conversation she started in Part 1 about Erica Garner and the “social issue” of black women’s health. Here, she sheds light on the disenfranchisement of black communities in Austin, Texas, and the misconceptions that delegitimize the trauma of black women caused by police violence.

Smith speaks candidly about Austin’s historic neglect of its black population, exacerbated by recent urban development that has displaced and sidelined the lives of black Austinites. “I’ve often come home to police blocking my street, to helicopters hovering, to stand-offs,” Smith says. “I’ve often come home to young black folk in my driveway being frisked and questioned.”

So staggering is the evidence for systematic marginalization and its ubiquity that Smith believes a “Ferguson-style tragedy” could be imminent. “We need to be very careful here in Austin, because our purported liberal identity does not take into account our deep-seated racism,” she says.

The reach of Austin’s much-touted progressivism, as well as its outdoorsy, laid-back appeal, isn’t a matter of city limits. “What many people in the city don’t understand is the way that black people who live here aren’t necessarily allowed to enjoy it in the same ways,” Smith says.

Inevitably, accumulating racial microaggressions—made invisible by the veil of good intentions—takes their toll. “If there’s one thing that I hope I can share with the folks in Austin, it’s that as a black woman—as a black woman who’s got a black family—it’s hurtful,” Smith says.

If Austin communities are to reckon with a legacy of racism that continues to manifest culturally, politically and geographically, the quality, as much as the quantity, of dialogue around race must be addressed.

“Dialogue is not just about talking,” Smith says. “It’s also about silence, and its also about listening. That’s something we have to start doing more of.”

Just as exclusionary or euphemistic language can hide underlying prejudices, certain analytic frameworks can reduce the circumstances of racially charged phenomena—like police killings—to a numbers game. This is particularly true of how female victims of police violence are portrayed and perceived.

“Part of the reason we envision victimhood in narratives of police violence to be masculine is because our research methodologies are masculinized,” Smith says.

Another problem is the tendency to isolate police killings and their victims from their expansive historical and structural contexts. “The problem is the way we’re approaching this according to time,” Smith says. “We’re thinking about police violence as a discrete moment in time with a beginning and an ending.”

“We [women] are the primary victims,” Smith says. “And that can come in various iterations, but to think of us as collateral—to think of us as after-effects, for all intents and purposes—really doesn’t pay attention to the very acute and primary forms of trauma that we carry on our bodies because of these experiences.”

Smith points to the stories of Breaion King, an Austin schoolteacher who was violently and forcibly arrested in 2015, and Diamond Reynolds, who witnessed the fatal shooting of her boyfriend, Philando Castile, by a police officer, as particularly “legible” examples of the primary trauma black women experience due to police violence.

What’s more, Smith’s findings on police violence cross borders. Her new book, Afro-Paradise: Blackness, Violence, and Performance in Brazil, ends where her research on the impact of police violence on black women’s health begins—that the trauma extends to the entire family.