“We have got to look at the social context that produces certain kinds of experiences for people—and that’s directly tied to social determinants,” Dr. Christen Smith says. “Unfortunately, in the world we’re living right now, police violence is a social determinant.” 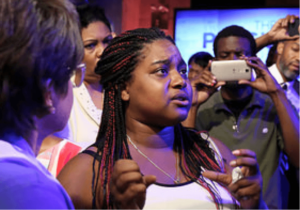 In December 2017, 27-year-old activist Erica Garner suffered a substantial heart attack and passed away shortly after. She was the daughter of Eric Garner, a black man choked to death by an NYPD police officer in 2014.

In the first of a special two-part episode of Into the Fold, Dr. Christen Smith, associate professor of African and Diaspora Studies and Anthropology at The University of Texas at Austin, delves into the social determinants that not only link Erica’s death to her father’s, but also shape the unique health struggles faced by black women.

When Smith first caught wind of the news of Erica’s heart attack, she felt a profound “rush of emotion”—and she certainly wasn’t alone. Grievers flooded social media platforms with expressions of solidarity and sorrow, staying vigilant throughout Erica’s hospitalization and holding a “digital wake” after her passing.

“In moments of grieving for the black community—particularly when you’re talking about the violent moments of police killings—Twitter and Facebook have been collective spaces of mourning,” Smith says. “They have been healing spaces.”

These healing spaces have doubled as sites of conversation—a way for communities to explore the broader histories and contexts that ground media-spun tragedies in the realities of lived experience. Although some speculated Erica’s death to be an isolated event, Smith’s research on the traumatic effects police killings have on black women proves otherwise.

“One of the reasons why black women have such adverse health experiences in pregnancy is because of the stress of racism,” Smith says. “It’s the weathering—the biological breakdown on our bodies that racism produces—that literally makes us older than we are, and also makes our pregnancies more precarious.”

Three weeks before she passed, Erica spoke in her last interview about the mental and physical toll of her father’s death. She mentioned Venida Browder—mother of Kalief Browder, a young black man who took his own life after being tortured and held in solitary confinement on Rikers Island—and her death from a “broken heart.”

In the footage, Erica voices her own struggles with a system that “beats you down to where you can’t win,” casting a questionable and altogether unfavorable light on attempts to divorce the causes for her death from her father’s.

From Conversation to Collective Action

Failing to acknowledge the connections between the deaths of Eric and Erica Garner—as well as those between police killings and the health of black women more generally—not only obscures the social dimension of police violence, but also reveals an inconvenient truth about American audiences and their media consumption. “I think it’s important for us to recognize that even in sickness and in death, people are not able to really feel and empathize with black women’s pain,” Smith says.

That missing link—the very same that skews the memorialization of victims of police violence like Eric along racial lines—further complicates public perception of black women’s health. “At what point do we begin to see this as a social issue?” Smith asks. “At what point do we say this is a mental health issue—one that is killing people, that is harming communities—and we have a collective responsibility to deal with it?”

As important as conversation is to wrestling with these questions, it falls crucially short if not substantiated with collective action. “We can’t do anything individually, because one person can’t carry a fight,” Smith says.

“One person can’t carry a struggle. We have to struggle in community because that way, when somebody gets tired—when somebody needs a break—then somebody else is there to pick it up.”