“Like most men of color,” Dr. Calvin Kelly says, “I’m trying to uncover, unravel and refine my own identity—and what it means to be a black man in this ever-changing place we call America.” 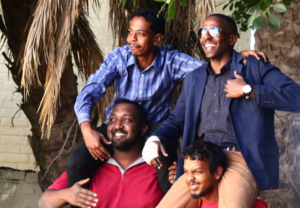 In the U.S., men of color seeking mental health treatment face the twofold challenge of being “overlooked and underserved.” Minority men are not only sorely underrepresented in the mental health workforce, but also more than two times as likely to be uninsured than their white counterparts.

Without a strengths-based approach to identifying the vulnerabilities of minority men, conversations about their mental health tend to hover around deficits alone. “Men and boys of color are well aware that they are seen as problems first and people second,” wrote Dr. Octavio N. Martinez, Jr., executive director for the Hogg Foundation, in an op-ed on the subject. “For those who live with mental health challenges, this experience is intensified.”

In observance of Minority Health Awareness Month, the latest episode of our Into the Fold podcast features Dr. Calvin Kelly, current dean of student development and former director of the Health & Counseling Center at St. Edward’s University in Austin, Texas.

Building Trust Around Stories and Strengths

Over the span of his career as a mental health professional, Dr. Kelly has learned a thing or two about earning the trust of minority men. “When speaking to or working with a man of color, the first thing I do is honor their humanness,” he says. For Dr. Kelly, that means helping the person in front of him work towards a basic sense of self—understood by both parties—before any symptoms enter the picture. Simply starting counseling sessions by chatting about life at large, or self-disclosing his own struggles with mental health, are two ways Dr. Kelly normalizes a potentially nerve-wracking discussion of stigmatized behaviors.

Dr. Kelly knows that encouraging minority men to play an active role in improving their mental health and well-being also requires listening to their individual stories and recognizing their individual assets—though not at the expense of context and community. For black men especially, a long history of adversity and race-based exclusion from healthcare coexists with two strengths that go just as deep: a capacity for resilience and a “zest for living,” as Dr. Kelly puts it.

Another way to energize men of color around mental health is to utilize the “natural spaces that men of color find themselves in,” like barbershops and churches, as forums for conversation and opportunities for education. In the classroom, lessons on bullying and masculinity can include both fathers and sons. “We’ve got to start where it really happens—as early as we possibly can,” Dr. Kelly says.

“My health and well-being, like most men of color,” Dr. Kelly says, “is produced from an extremely intertwined set of relationships between behavioral, social and structural factors that impact us across our lifespan.” Many minority men, while dealing with the everyday stressors they’re disproportionately exposed to, may feel they have to go the extra mile to do much of anything for their health. To take care of himself, Dr. Kelly chooses to focus on what’s within reach—exercising frequently, prioritizing social connections, making time for leisure. Leading a fulfilling life, he believes, means striking a crucial balance between work and play.

Destigmatizing and addressing mental health at a larger scale, however, is another story—the difficult task of examining what it really means “to be a man of color or male in our society,” and the role mental health can play in that dialogue. “We’ve got to claim a new national narrative that supports mental health being just as important as physical health,” Dr. Kelly says.