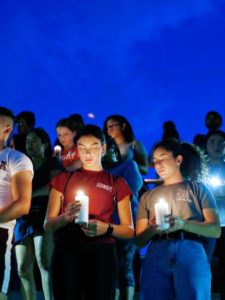 The Hogg Foundation offers its deepest condolences to those impacted by the shootings in El Paso, Texas and Dayton, Ohio and for the lives lost. Our hearts go out to our friends in the El Paso area, and anyone else affected by this tragedy.

As has become commonplace for these incidents, there is rampant speculation about the suspects’ mental health. As we have stated previously, accurate information is an important part of coping and resilience, and misplacing blame for these horrific acts of violence emboldens stigma surrounding mental health and makes healing more difficult.

There is evidence that the El Paso suspect was deeply steeped in white supremacist ideology. If true, it is likely this indoctrination played a vastly larger role in disposing him toward lethal violence than his mental health history. It has been proven throughout history that racism and dehumanization of others propels people, even entire societies, toward unimaginable atrocities.

Under different circumstances, the foundation would appreciate the public attention being given to mental health.  However, we can’t stand by while mental health is presented as a politically expedient alternative to the more courageous conversations that need to happen about racism, dehumanization and gun violence in the U.S. So far, our political leadership has been unwilling to lead the right kind of narrative. Thus, misinformation about mental health’s relationship to violent acts persists, leading to greater stigma for those with lived experience of mental illness, as well as a perpetuation of the avoidable epidemic of racially-fueled gun violence.

We have other examples. The recent drive-by shooting outside a synagogue in Miami, Florida, for example. Or the truly nightmarish massacre at a predominantly black church in Charleston, South Carolina in 2015. The conclusion is inescapable: hatred, dehumanization and alienation threaten our social fabric as well as people’s well-being.

We’ve compiled a short list of mental health resources to help address the trauma and shock people may be feeling. These are not official endorsements, nor is this list exhaustive. Please share this information with those who may be struggling.

As we search for ways to put an end to such tragedies, we encourage our fellow neighbors to do two things: