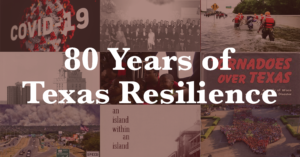 Over the eighty years of the Hogg Foundation’s history, Texas communities have experienced many challenging times. What remains unchanged is that we’re here—providing resources and support during good times and bad. What follows are a few examples documenting the foundation’s responses to historic crises.

The tragic attack on Pearl Harbor on December 7, 1941 and the entry of the U.S. into World War II created complex and rapid social, economic, familial and demographic changes, and these in turn shaped the newly-formed Hogg Foundation. To meet these needs, foundation staff developed and hosted seminars, workshops and training sessions. In doing so, the foundation helped men in the military, their wives and children, along with thousands of employees working in industry for the first time cope with their greatly changed society. By war’s end, the foundation had worked with a staggering 2,000 groups in 152 communities, helping over 400,000 people.

After the war, the foundation announced that chaplains trained in counseling had reduced the number of psychiatric discharges at Fort Hood by over 50 percent.* To build on this success, in 1955 The Foundation awarded grants to continue training military chaplains as mental health counselors. Seminars helped chaplains provide “preventive counseling” to stressed soldiers. In return, the chaplains provided feedback about the types of mental health challenges they encountered. By 1960, Dr. Bernice Milburn Moore had served as the director of eight month-long seminars, attended by 241 chaplains.

Throughout wartime and beyond, the Hogg Foundation’s leader and director, Dr. Robert Lee Sutherland, fought for causes that harmonize with today’s notions of social justice. Sutherland urged audiences of civic leaders, educators, and employers to resist the growing propensity of people “learning to hate” citizens whose ancestors came from Axis/enemy countries, stating that it was “proof of the need for positive mental health… (urging people) to hate a bad system of control, but not a fourth of the world’s population.” In addition to fighting systemic racism, the foundation and Sutherland attacked sexism. Proclaiming that “The Women’s Army Corps has helped destroy the final tabu [sic], assuring an equal status for women in the post-war world,” and further declaring in one talk:

([T]he Women’s Army Corps have) helped remove the few lingering superstitions about the efficiency of women workers. When during wartime, women can replace men in important types of military work, their ability to be trained for almost any type of service is established… (which) should lead to the more complete acceptance of women in the task of post-war planning. In the future, conference tables will have men and women working together planning the solution of international problems, as well as home front affairs.**

Dr. Harry Moore’s book, Tornadoes Over Texas, published by University of Texas Press in 1958, was an in-depth study of the effects and consequences of the devastating tornadoes which hit Waco and San Angelo, Texas on May 11, 1953. To compound the devastation for San Angelo, another storm hit almost exactly one year later, crippling the rebuilding process. With a broad spectrum of experts collaborating on the study, Tornadoes Over Texas described more than the events themselves, evaluating the short- and long-term aftermath for these communities in the wake of the storm. Dr. Moore, a professor of sociology at The University of Texas at Austin, soon became known as an expert on disaster research.

As is often the case, the worst impacts of the disaster were felt by t racial and ethnic minority groups and those at the bottom of the socioeconomic ladder. Based on Dr. Moore’s research, groundbreaking work detailing plans for disaster preparedness and forming public safety nets began in earnest. This pioneering work was done with support from the Hogg Foundation and other departments across UT including the Office of Emergency Planning of the President, the Office of Civil Defense, and the dean of Arts and Sciences, Dr. Alton Burdine.*** It set the course for disaster preparedness planning nationwide, most importantly the subsequent development of mental health strategies to help communities cope, especially for those who are most vulnerable.

Another lasting legacy grew from this study of disasters in the form of the Moore Fellowship at the Hogg Foundation. Established in 1995 by the estate of Dr. Bernice Moore, the award is made in honor of her late husband’s vocation studying the human experience in crisis and adversity. Eligible students apply for an unrestricted, one-time $20,000 award in support of completion of their dissertations.

On August 1, 1966, The University of Texas and the greater Austin community lived through the worst tragedy in its history: the Charles Whitman mass shooting. The foundation’s offices were on the 24th floor of the Tower, just five flights below where Whitman stood for 90 minutes, cutting random people’s lives short. The very first person killed, tower receptionist Edna Townsley, was a good friend to many on the staff. Eleven Hogg staff members were present and accounted for that day, barricaded in their offices during the rampage. And we have this gripping first person account from Linda Swan-Adkins, in an interview for Into the Fold, our podcast.

But the Hogg Foundation was more than a bystander. In the shooting’s aftermath, the foundation played a leading role in the development of campus mental health services for students and faculty. Even before the shooting, director Robert Sutherland and Dr. Ira Iscoe, a longtime ally of the foundation, both served on a task force created by the UT Board of Regents to recommend improvements to the university’s student counseling services. After the shooting these efforts took on a renewed vigor, with Iscoe especially being instrumental in improvements such as an increase in the number of full-time counselors at the health center, the hiring of graduate student counselors for undergraduate dormitories, and the development of a 24-hour crisis hotline.

These examples from the Hogg Foundation’s history demonstrate a pattern of quick responsiveness which carries on to this day. Whether by providing direct financial support as in 2017 via The Hurricane Harvey Relief Fund, or our current response to the unprecedented crisis of COVID-19, the Hogg Foundation has proven its ongoing commitment to finding and sharing innovative, restorative, and effective methods for helping Texans thrive.

Part of our educational mission is to document, archive and share the foundation’s history, which has become an important part of the histories of mental and public health in Texas, and the evolution of mental health discourses nationally and globally. Archival information about the foundation is available at The Dolph Briscoe Center for American History at The University of Texas at Austin, including, but not limited to, the Ima Hogg Photographs and the Robert Sutherland Papers. We also have a robust collection at the foundation office. Research questions and appointments can be made by contacting our archivist at hogg-archives@austin.utexas.edu.

***From the forward written by Dr. Robert Sutherland in 1971’s Hogg Foundation publication, “Disaster…Storm Ahead”