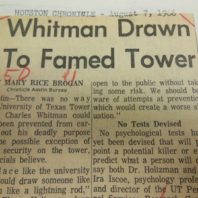 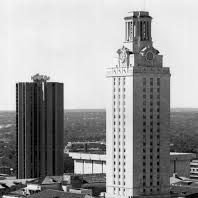 On this day 50 years ago, The University of Texas and the greater Austin community lived through the worst tragedy in its history: the Charles Whitman mass shooting. It started around 11:30 a.m., and lasted for approximately 90 minutes.

In the decades since, the gunman’s background, motivations, and psyche have been endlessly discussed and dissected. The shooting was also the earliest instance of one unfortunate fact: that there are few things as effective as a mass shooting for raising public awareness of mental suffering. But as we have attempted to argue, the kind of “awareness” forced on us by mass shootings is a double-edged sword; heightened vigilance about mental illness, including this sense that some unknown number of persons with mental illness are “ticking time bombs,” can come at the expense of the kind of searching exploration of root causes that really drives systems change — and should drive our advocacy as well.

The Hogg Foundation has its own special relationship to the tragedy. Our offices were on the 24th floor of the Tower, just five flights below where Whitman stood for those 90 endless minutes, cutting random people’s lives short. Some of the dead were known to Hogg Foundation staff. The very first person killed, tower receptionist Edna Townsley, was a good friend to many on the staff. Eleven Hogg staff members were present and accounted for that day, barricaded in their offices during the rampage. And we have this gripping first person account from Linda Swan-Adkins, in an interview for towerhistory.org:

I had just graduated from UT and was working for the Hogg Foundation for Mental Health on the 24th floor of the Tower the day of the shooting. Never having been around guns, when we heard the first shots, it sounded to me like lots of metal folding chairs being collapsed on a concrete floor.

And we also have this from “Nightmare at Noon.”  The title of Hogg Foundation staff member Dave Latz’s first-person account of the horror:

The Foundation had a special bond with several of the victims. Paul Sontag, an outstanding high school graduate, had taught young Johnny Trow, Dr. Sutherland’s grandson, swimming the past two summers. Paul and his girlfriend, Claudia Rutt, happened to be walking along Guadalupe Street in front of the Co-op Store. Both were killed.

Clearly, we have more than an academic interest in this subject. The role played by the Hogg Foundation in the shooting’s aftermath, such as our leading the development of campus mental health services for students and faculty, was driven by this deeply felt sense that our systems had failed Mr. Whitman, and us.

So, as we look back on that terrible day, the Hogg Foundation sends its thoughts and prayers to the fallen and their families, to the survivors and their families, to the UT community, and to the Austin community.  I would also like to echo a sentiment that I recently expressed in response to more recent tragedies: the Orlando and Dallas shootings. It is our community-mindedness and willingness to love one another, as well as our ability to resist fear, stigma, and scapegoating, that provides the surest bulwark against the dark forces that drive individuals, like Whitman, to perpetuate inexplicable acts upon their fellow human beings.