All DADS programs and services transitioned to HHSC on September 1st, 2016 except for Program Operations, Regulatory Services and the state supported living centers (SSLCs) that are expected to transfer by September 1st, 2017. At that time, DADS will no longer exist as a separate agency. 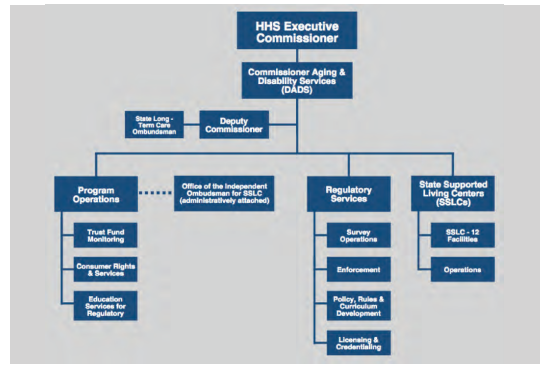 DADS was under the review of the Sunset Advisory Commission, along with the other Texas Health and Human Services agencies, before the 84th Legislative Session. Sunset staff carefully reviewed DADS’ internal policies, procedures, and service delivery. The Commission ultimately recommended dissolving the agency and moving its functions into the Health and Human Services Commission (HHSC), in an effort to better serve older Texans and individuals with physical, intellectual, and other developmental disabilities (IDD).

The Sunset Commission also tackled the highly controversial issues surrounding the continued operation of the state support living centers (SSLCs). The Commission recommended closing six SSLCs, closing the Austin SSLC by September 2017 and identifying five additional SSLCs to close by September 2022. Those recommendations, along with statutory recommendations on other programs within DADS, were solidified in the DADS Sunset bill, SB 204 (Hinojosa/Raymond). The bill passed the Senate with a few changes, but after lengthy discussion on the House floor, House members removed the SB 204’s recommendation to close the Austin SSLC and establish the SSLC Restructuring Commission. Members of the conference committee could not reach an agreement on the DADS Sunset Bill’s content, and SB 204 died days before the end of the legislative session.

The failure of SB 204 means that every SSLC will remain open until further legislative direction is received. However, many other DADS-related recommendations from the Sunset Commission were adopted in the final HHSC Sunset bill (SB 200), including changes to nursing home requirements and services for individuals with IDD.

The Health and Human Services Transition Plan was released in March 2016 for review by the Transition Legislative Oversight Committee. The proposed plan outlines the future of DADS’ programs and functions. The SSLCs will be placed in the new Facility Operations Division under HHSC, which will operate two types of state-owned facilities: state hospitals and SSLCs. For more information on the HHSC and DSHS Sunset changes, see the Texas Environment section of the guide.

Note: Additional information on services for individuals with intellectual and other disabilities in both community and residential settings can be found in the “Community Services” Medical and Social Services section under HHS System.

Approximately 3,145 individuals reside in these facilities. Although the SSLC population has declined significantly over the past decade, any discussion related to closure or consolidation of facilities has been met with strong legislative opposition. There was significant debate around the SSLCs during the 84th legislative session due to the DADS Sunset Recommendations to close six SSLCs, including closing the Austin SSLC by September 2017. As mentioned earlier, ultimately the legislature voted to keep the Austin SSLC and all other SSLCs operational. In Texas, only the Texas legislature can direct closure of a state supported living center.

Due to fixed costs and the deterioration of aging facilities, as the number of residents in these facilities declines, the per person costs increase. According to the Sunset Commission final report, maintaining the large system of state-run facilities is costly, involving more than 13,900 employees and a budget of $661.9 million a year. An HHSC report revealed that delivering services to a person in an SSLC costs $856.70 per day, totaling over $360,000 per year. Further, maintaining the SSLCs’ dilapidated infrastructure adds even more cost to the state.

As part of a 2009 settlement agreement with the U.S. Department of Justice over conditions at SSLCs, DADS agreed to improve health, safety, and quality of care for consumers living in them. The agreement includes increased access to psychiatric care and psychological services, as well as improved policy and practices to reduce of the use of restraints. Independent monitors were assigned in mid-2014 to visit and report on conditions at all 13 SSLCs. Despite the 2009 agreement, the June 2015 monitoring report for the Austin SSLC continued to identify significant deficiencies. The 2015 monitoring report also identified instances of “individuals receiving psychiatric services who were not making progress or maintaining stability.” Other 2015 monitoring reports identified deficiencies related to psychiatric and psychological services at all of the SSLCs, including individual residents not progressing toward psychiatric goals and not maintaining psychiatric stability.

Figure 88 presents information on the eligibility requirements and services supplied by SSLCs. 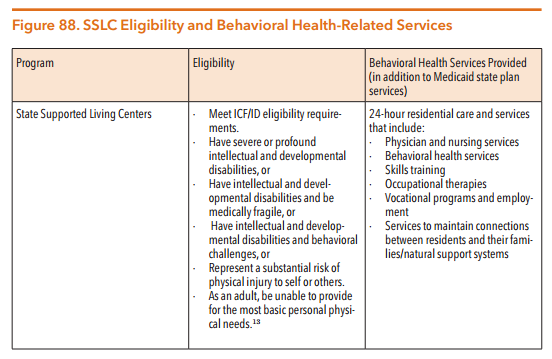 While the costs shown above are average costs, it should be noted that per person costs within each program can also vary greatly depending on the level of need of the individual. The Center for Medicaid and Medicare Services requires that each waiver program be cost neutral in the aggregate.

Figure 90 describes the state Medicaid costs per person, per month* living in an SSLC.

Office of the Independent Ombudsman for SSLCs

Note: The State Long-term Care Ombudsman is not in the Office of the Independent Ombudsman for SSLCs.

Senate Bill 643 (81st, Nelson/Rose) passed in 2009 to create the Office of the Independent Ombudsman for SSLCs. The Ombudsman office provides oversight and protection for individuals who reside in SSLCs. The office is independent of DADS and HHSC and reports directly to the state’s elected officials in the executive and legislative branches. Each SSLC has an independent ombudsman working onsite responsible for:

According to the July 2016 HHS Transition Plan, the Regulatory Services Division will provide federal certification for health care facilities participating in the Long Term Services and Supports (LTSS) Medicaid and Medicare programs and state licensure for facilities providing licensed health care services. Regulatory Services will also provide licensure of home and community support services agencies that provide home health, personal assistance, and hospice services. Regulatory Services is intended to ensure that regulated facilities and agencies comply with federal and state rules appropriate to the services they provide, as well as make determinations regarding minimum standards and requirements for service, and identify deficient practice areas.

The Regulatory Services division will house the following departments:

NEXT SECTION: TEXAS DEPARTMENT OF FAMILY AND PROTECTIVE SERVICES