“One size does not fit all. In a very real sense, when it comes to health, race matters.” 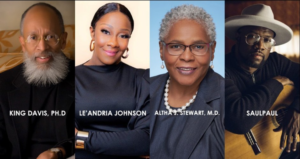 This episode of Into the Fold takes place against the backdrop of the 20th anniversary of the annual Central Texas African American Family Support Conference (CTAAFSC), which took place in Austin on February 11-12, 2020. When this conference began in November 2000, it was the first of its kind in Texas and only the third in the United States to focus on the healthcare needs of African Americans, with the goal of confronting barriers to mental health access. This year’s anniversary conference overlaps with the 80th anniversary of the Hogg Foundation for Mental Health, which has been integrally involved in the conference since its outset and is a gold sponsor for this year’s event.

Historic Issues of Race in Psychiatry

Our first guest is one of the keynote speakers from the conference, Dr. King Davis, professor of research at the University of Texas at Austin School of Information, former executive director of the Hogg Foundation for Mental Health, and the principle investigator of the digital archive from the Central Lunatic Asylum for the Colored Insane (now the Central State Hospital in Petersburg, VA). The Central hospital was the first mental institution created exclusively for newly freed slaves in the United States. Davis’ leadership on this project, which involved digitizing more than 800,000 original documents from the Central hospital from as early as 1864, was driven by a desire to reflect on the history of psychiatric treatment in the US — and the extent to which treatments reflected issues of race, class, and gender.

Because patients at the Central hospital were only a few years out from having been freed from servitude, Davis believes that understanding the process of admission, diagnosis, and care that people received is of “real importance” in terms of understanding this moment in history. Davis will begin a similar project, funded by a grant from the Hogg Foundation, with historic documents from the Austin State Hospital (ASH), formerly known as the Texas State Lunatic Asylum, where he hopes to use similar methods for preserving and digitizing historical psychiatric records.

Health Equity as an Issue of Social Justice

Our next interview is with another keynote speaker from the conference, Dr. Altha J. Stewart, Senior Associate Dean for Community Health Engagement for the University of Tennessee Health Science Center in Memphis and former President of the American Psychiatric Association (APA), for which she was the first African American woman to be elected in the 175-year history of the organization. In her keynote address, Stewart emphasized defining health equity as a matter of social justice. “Anyone who cannot afford the cost of healthcare is not being served by our current system,” says Stewart, who discusses how our current healthcare system is structurally designed to be inaccessible to those who need it most.

In considering research models that are uniquely suited to address the problem of health equity, Stewart argues for a community-based model. “You don’t have to go far to find the research to demonstrate, in mental health, for example, that people of color come into the system when they are farther along in the development of illness, when the symptoms are creating more serious problems, and when the level of intensity of the treatment that is needed is more costly, more restrictive, and more challenging on many levels,” explains Stewart. “That research is done, done and done. The data is there.” Community-based models are best suited to translate that data into effective models of care that address the real needs of people who historically have been left out of or wronged by systems of care.

There is No Health without Mental Health

Stewart feels hopeful that mental health be a real driver in the goal of achieving health equity, because of the interconnectedness between mental health and other kinds of health. “There is no health without mental health,” Stewart tells us. “People are more likely to follow medical health treatment regimens if they are psychologically predisposed to understand the importance and follow the ways we change behaviors to improve health.” What’s more, most people with a medical problem are more at risk for developing some psychological distress problem that would benefit from mental health treatment, like depression developing in cancer patients, or anxiety in those who suffer from cardiac illness and live in fear of the next event.

What is crucial in working towards any kind of health equity is acceptance of historic injustices that led to the creation of our current systems of care that disadvantage those who need care the most. “One size does not fit all,” states Stewart. “In a very real sense, when it comes to health, race matters.” To ignore any of those factors is to deny people what they really need.