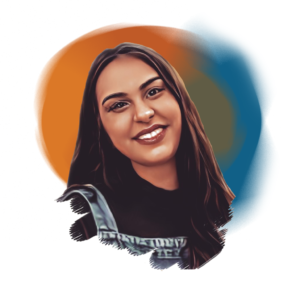 This post was authored by Nirali Thakkar and is one of the prize-winning entries of the New Voices Showcase. We thank Ms. Thakkar for her submission.

To my Asian brothers and sisters,

Take it from me: we have been so tragically fooled.

As a South Asian, I always felt far removed from the harm of racism. I wasn’t Black, and as a non-Hispanic individual, I didn’t fully identify with Brown. When I learned about social issues, I didn’t feel like I could express any hurt given my many economic privileges. I simply knew the language to explain the many faces of oppression that perpetuate inequity against people of color. I never once felt like I was the recipient of them.

For 22 years, I remained out of touch with this lived experience, and then I entered a graduate program in social work during the pandemic. I was under the impression I would be surrounded by diverse individuals, but within the first week, I experienced a major culture shock. In every single classroom, I was blatantly and uncomfortably different– one of the darkest individuals there, and one of few Asian Pacific Islander Desi American (APIDA) folks. As my white classmates listed off their needs for safe spaces, nodding in agreement with one another and validating in the Zoom chat with +1s, I tuned in– quite forcefully and deeply– to a sense of misalignment that would continue to fester within me.

I pushed forward in the program waiting, hoping for the moment of security to arrive. With each week though, the seed grew and grew, shifting from a small anxiety to a large weight that sat on my chest.  It felt like the APIDA experience was simply erased.  We seldom discussed the model minority myth and we never addressed the hate crimes that took place during the pandemic, even though these truths were happening right in front of us. My only experiences acknowledging these realities were with individuals who shared this part of their identity with me: my sparsely distributed classmates and the only South Asian professor in my program. We bore the weight of acknowledging, amplifying, and advocating, and that weight became heavy. Amid the many meaningful social and emotional connections I had with other students, I still felt completely alone and increasingly anxious.

Despite these new challenges stemming from my South Asian identity, I still felt a sense of safety from racial trauma; in specific, I never thought I’d be the recipient of the angry colored woman label. But I was tragically fooled. In response to my efforts to integrate a more critical race lens into the classroom, a person in power responded with every aspect of the textbook definition of white fragility: discomfort, defensiveness, and retaliation. She slapped that label across my face in the most twisted way possible–publicly to every single one of my classmates and friends. As the darkest individual in the classroom, I should have known that I was not protected, but rather the next most logical target of racism. After years of passive  harm, I finally had a wakeup call to the depth of active racism.

For a few weeks, I was in fight mode. Determined to create change, I set up meetings with change seekers, posting in community group chats and joining advocacy channels. In retrospect, I recognize that model minority myth got the best of me.  I was desperate to maintain an image of being indomitable, and so I inflicted further harm on myself, dismissing the space my friends continuously offered and held for me. Underneath the facade, my fight turned into a freeze– an imminent sense of doom, an unshakable feeling of anxiety and hopelessness. I was no longer removed from the experiences of racial harm, and that was a safety I could never regain.

I want to be clear here: I’m not claiming “All Lives Matter” or saying we should forget that the original target of systemic racism was, and is Black communities. It’s not me seeking attention.  It’s me apologizing for my blissful ignorance, reaching a hand out to other people of color. And to you, my brothers and sisters, it’s me asking to pay close attention.

Think back to your experiences struggling to study and learn and having your classmates completely dismiss your efforts, calling you “naturally smart.” Think back to the kids that asked you where your “Hindu dot was”, the professor that looked right into the eyes you inherited from your Korean parents when they lectured on Japanese internment camps, and the discomfort you felt in their assumption and label of your identity. Take it from me: these are not silly, harmless words and mistakes, and they most certainly are not isolated.

There’s a sense of ambiguity that model minority myth creates in our lived experience. The access to opportunity and praise from white folk (to name just a few of its tenets) create this sense of misalignment where it doesn’t feel like harm is identifiable or expressible. And in the midst of ambiguity is silence. At the end of the day, while there is a sense of false safety, this system causes both passive and active harm, and the last thing I wish upon anyone is the feeling of impending doom, fear, and anxiety that became so ingrained into my reality. Knowing is one thing, but realizing the pit in your stomach, elevated heart rate, and desperation in your legs to run all connect to the experience of  racial harm– that hits different. It’s time to lean into the truth, because from the truth comes change.

Think about it: if our communities joined other people of color, if we amplified our voices and stories alongside them, we could break the silence, rip away at the fabric that cushions white folks, and bend the metal rods that cage away any hopes of changing the narrative of oppression.

This is all even more vital to consider during the pandemic, as it has brought forth what a mentor of mine describes as a new moment. And at this moment, students are broadly expecting more. As a whole, we want more than a DEI statement, a positionality statement, or a lecture on what racism is. At this moment is the potential for more permanent change. At this moment, we have an opportunity –and personal accountability– to act beyond the performative and really do better.

To my Asian brothers and sisters, we may have been fooled, but this does not make us fools. It’s time to wake up and show up. And despite what every system, person, and waking bone in your body says, don’t ever shut up. Take it from me: it’s time to disrupt.

Nirali Thakkar is an MPH-MSSW candidate at the University of Texas-Austin. As a South Asian individual, she often found that her narrative as an individual was overlooked, and as a community, erased. Thus, she strives to amplify her voice alongside others. In her career, Nirali hopes to pursue policies on aging. She currently works as a research assistant in Dell Medical School, Population Health, and recently completed a year of research in the Steve Hicks School of Social Work working on qualitative research for care partners of older adults living with dementia. In her free time, you can find Nirali taking dance classes and scooping gelato.