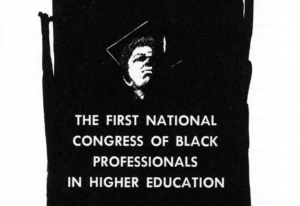 On the evening of April 5, 1972, President Lyndon Baines Johnson addressed an audience of academics, professors, and students for the First National Congress of Black Professionals in Higher Education:

“I’ve always believed that the surest way to black power – the kind of black power that gets things done – is through the polling place and through the universities. If you give black Americans an equal opportunity for higher education, and then you put a ballot in their hands, they will carve their own destiny. The ballot has become a fact. And now the doors of our colleges and universities – doors that stand ajar – must be opened completely to all of our citizens, of all races, and of all economic conditions.”[1]

This national convening, funded in part by the Hogg Foundation, was the vision of UT professor Dr. Melvin P. Sikes. As recounted in a Hogg Foundation report on the proceedings:

“It began with the self-examination of a lonely black professor in an ambiguous situation on a large, predominately white campus with minimal minority group representation. It began with his realizing that he was one of a number of such persons who live in two worlds and who spend most of their lives walking a tightrope between them. Of course, Melvin Sikes is not alone on that tightrope, and all of those who walk it are not Black.”[2]

Dr. Sikes brought Black people from all around the country together in Austin to “develop new conscience toward higher education for the Afro‐American.”[3] This three-day conference included workshops on 5 primary areas of concern: research, curriculum and instruction, administration, public service, and student personnel, and student development. A special topic on the need to make Black Studies a discipline was added to the conference proceedings because of its stated importance across all the other areas of concern.

The conference covered huge, important topics, and developed many nuanced recommendations, but a few key ideas recurred throughout, including:

This conference provided a significant opportunity for Black academics to connect, reflect, and organize a movement to change predominately white colleges and universities, which were only just beginning to open their doors to Black academics. It is important to note the ongoing nature of this work, and that many of these recommendations still ring true today. As one conference participant noted:

“Be ready and willing to accept some insecurity in the struggle toward change. One can’t be concerned about one’s tenure while attempting to deal effectively with the problem of social change.”[5]

Part of our educational mission is to document, archive, and share the foundation’s history, which has become an important part of the history of mental and public health in Texas, and the evolution of mental health discourses nationally and globally. Archival information about the foundation is available at The Dolph Briscoe Center for American History at The University of Texas at Austin, including, but not limited to, the Ima Hogg Photographs and the Robert Sutherland Papers. We also have a robust collection at the foundation office. Research questions and appointments can be made by contacting our archivist at hogg-archives@austin.utexas.edu.

[1] Johnson, Lyndon B. (1972). Remarks from Report of the First National Congress of Black Professionals in Higher Education. The Hogg Foundation for Mental Health, p. 17