History is Our Heritage: Centering History & the Psychology of Who We Are 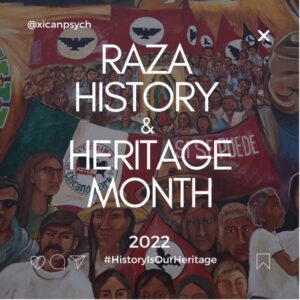 Having a rooted sense of self is important for all, but particularly for groups that have a history (and contemporary experience) of being marginalized. Brown communities have long dealt with negative stereotypes, discrimination, and violence. We are still struggling to make it into the school curriculum even though we have been on these, our ancestral lands, for thousands of years and have been participants in the evolving history of this country since its inception. Even as we recognize Hispanic or Latinx Heritage Month, our history as a people continues to be marginalized or excluded in our society.

One thing that I love about Black History Month is that it is Black HISTORY Month. Think about what comes to mind when you think about Black History Month. What is celebrated? What people and what events are highlighted? Oftentimes we think of important events and leaders of the civil rights movement, including fights against desegregation and for political representation. We also remember the terrible legacy of slavery and the fight to end it.

Now, think about Hispanic or Latinx Heritage Month. What is celebrated or highlighted most often? What images or events come to mind? Typically, what is most highlighted are cultural events that feature music, dance, and food. Under the guise of “heritage” we lose the crucial sense of history that is also important in recognizing our communities’ contributions. Although there IS much to celebrate from our rich, powerful, and ancient culture; too often in mainstream society we are reduced to two dimensional caricatures who seem to be brought out “on stage” to entertain with our vibrantly colored clothing and rhythmic music. What about the history of having some of the first successful school desegregation cases in this country (Maestas v. Shone 1914, Alvarez v. Lemon Grove 1941, Mendez v. Westminster 1947)? What about the fact that we earned the most medals of honor in World War II? What about the fact that our ancestors come from two of the original mother civilizations in the world (Anáhuac and Tahuantinsuyo)? Let’s remember the history of our people actually being the first “cowboys” (vaqueros) who worked these lands and taught the White settlers about cattle and ranching.  Do we know that we had the first successful ethnic political party in this country’s history (La Raza Unida Party)? Keeping “History” out of our Heritage Month is another example of the violence of erasure.

The first known Chicana to earn her doctorate in psychology, Dr. Marta Bernal, found in her many years of research that a culturally rooted sense of self determines the degree to which we want to serve our community. Other research shows that a strong ethnic identity for Brown children has a positive effect on academic achievement. So, yes, even from a psychological perspective, history is crucial to the overall well-being and thriving of our community. History shapes identity and development. Let us say it again: history shapes identity and development.

One of the main criticisms Chicanx psychology has of mainstream psychology is its historical lack of attention to the role of history. One of the early Chicano psychologists to attend to this deficit is Dr. Manuel Ramirez, III. In 1982 he outlined a “Mestizo psychology and worldview” where he proposed that the European invasion of this hemisphere, and its subsequent impacts, need to be at the core of understanding current mental health and personality development of Latinx peoples. In other words, when it comes to our heritage, when it comes to identity and psychology, history matters.

We have a complicated history in this country; however, our people’s history has been relegated to an afterthought in the national dialogue about our communities. Thus, our actual rootedness on these lands, including what is now called the United States is often not known or even felt at a collective psychological level – even amongst ourselves. Our only current and consistent mainstream story in the nation’s consciousness is that of immigration and immigrants, and that story is an overwhelmingly negative one filled with xenophobia. The resulting consequence of this narrow, reified narrative is that we are seen as perpetual newcomers and perpetual foreigners. Both notions are false, and the opposite is actually true. We have been rooted in this land and on this continent for centuries and those that are more accurately foreigners are those of European descent living on these lands.

Graciella Castillo is program coordinator and social media designer for the Institute of Chicana/o/x Psychology. She is a volunteer program assistant with the Austin Latinx Chicanx Behavioral Health Network.

Jessica Tlazoltiani Zamarripa is co-director and co-founder of the Institute of Chicana/o/x Psychology. She is a long time Austin, Texas mami activist and community organizer working toward social justice within the Chicanx and Latinx community.

Dr. Manuel X. Zamarripa is co-director and co-founder of the Institute of Chicana/o/x Psychology based in Austin, Texas. He is a licensed professional counselor and supervisor, and received his doctorate in Counseling Psychology from the University of Wisconsin-Madison.