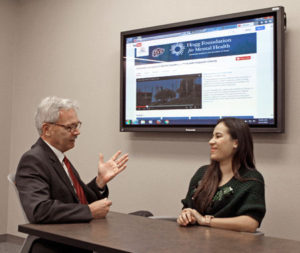 The Hogg Foundation’s Bilingual Scholarships Grant Program, which closed last year, was an important part of our multi-pronged effort to address the workforce needs of our state–in particular, the need for a culturally competent mental health workforce. But as we’ve learned, “cultural competence” has layers of meaning, and deepening our understanding of cultural competence and the ways it can be deployed is one of the unsung accomplishments of this grant program.

A sterling example is provided by the University of Texas at El Paso (UTEP) Department of Social Work. Using part of their Hogg funding, Mark Lusk, Ed. D., professor of social work, and Silvia Chavez Baray, Ph.D., research associate, developed a series of video training modules designed to help social workers incorporate knowledge of and sensitivity to the unique cultural context of Hispanic clients into their social work practice. These modules wonderfully illustrate what we mean by behavioral health care that “sees” the whole person, and not just their symptoms.

We caught up Mark Lusk, and asked him some questions about the training modules, their contents, and story behind their development.

In general, what is it that you’re aiming to accomplish with these training modules? We aim to enhance the skills of mental health workers and therapists to work with Hispanic and Spanish language dominant clients by learning key mental health terminology in Spanish, the theory and practice of cultural competence in mental health, the ability to adjust intervention styles to the culture, class, ethnicity, and identity of clients, and to use individualization with each client so as to be culturally competent with each person’s uniqueness.

What went into deciding upon the number of the videos, and their content? We identified the best people in our region on the basis of their ability and experience in working with a variety of Hispanic groups and clients. Each of the presenters is a master therapist and/or researcher and scholar who has years of experience working with Hispanics of different national origins. We wanted a presenter who could focus primarily on children, another who could focus primarily on trauma, one who could articulate the nature of effective treatment in a psychiatric setting, and another master therapist who primarily works with Native Americans who also speak Spanish. The intent was to provide several voices to the narrative of how to adjust mental health intervention or therapy to the cultural context of the client. Moreover, our goal was to illustrate that ethnicity is an asset and a strength, not a deficit, and what cultural traditions and belief systems among Hispanics serve as protective factors in therapy, healing, and recovery.

Can you summarize the content of the modules, and the issues they address? Was there a process by which you tested or piloted the modules before making them public?
In each case, I coached the therapist/presenter about the purposes of the series so that they might focus their comments on the strengths and resilience of Hispanic clients, by speaking through case studies to the ways in which Hispanics view their world, their family, their community, in relation to their problems and interventions that can be used to resolve those problems.

How were the actors chosen? The actors are all trained standardized patients who have been well versed and coached on the attributes and behaviors of specific types of client or patient problems and disorders. Each of the standardized patients is Hispanic, bilingual, and bicultural. Most of them have served as standard patients in classroom settings where they have developed experience in portraying various scenarios and mental disorders.

Were there any pre-existing models for this that you drew from, or is it fairly new territory? In social work education, we have been using role-plays for decades. What is different about this series is that we used standardized patients that have been trained and supervised over several semesters. Not to mention that all of the standardized patients represented an underserved group and insofar as they were all Hispanics and bilingual – the population in the United States that has limited access to mental health services in general and to culturally competent mental health services in particular.

What has been the initial response to these? Are there any pieces you think you might add at some point? We’ve been told that several schools of social work are using some of these modules IN their regular curriculum. Others have told us that these modules have stimulated them to think differently about how they are teaching students to work with clients from underserved populations. These modules represent a part of the ongoing emphasis at the University of Texas at El Paso in preparing a mental health workforce for the 21st century demographic.

How will you be able to tell you’ve made an impact with these? When we presented these modules at the state meetings of the National Association of Social Workers in Texas, we received enormously positive feedback about their potential. We have released them to the Internet via YouTube with no restrictions on use other than attribution of the authors, so it is unclear to us what their long-term impact might be. Notwithstanding, we think what we have done this highly innovative and might serve as a model for the development of modules on other populations such as combat veterans, Native Americans, or recent immigrant groups.

For your viewing pleasure, we embedded one of the training videos below. To get the full series, visit the YouTube channel.