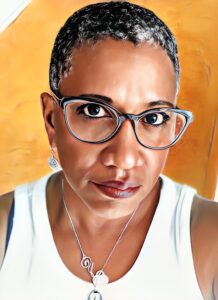 This blog post was authored by Karen Weaver, and is one of the prize-winning entries of the New Voices Showcase. We thank Ms. Weaver for her submission.

I sat in my writing room with my headphones on in hopes of drowning out the sounds of everyone’s Zoom meetings. I was miserable from all our family togetherness. We were in quarantine–together ALL the time, my husband, my son Cole (22), our dog Harry, and me. I loved Harry the most. He was the only one who didn’t have Zoom meetings and didn’t talk.

It felt like being married to two men. I barely wanted to be married to one. There was a physical pain in deciding what to have for dinner every night together. I thought about writing a book titled “How the Pandemic Killed Our Family.” My first sentence, “I was breathing when I wrote this…”

We are all still breathing, but none of us are the same. We have the footprints of trauma all over us.

It was too much all at once. COVID had Black people dying at disproportionate rates, while social injustice impacted us too. As a Black family living in Central Texas, we were exhausted by political fatigue with the President consistently stoking the flames of racism.

We were not okay.

My son is a young adult Black man with dark brown skin, kinky-curly well-manicured hair, soulful brown eyes, and strong stature. He has a beautiful heart and warm smile which he seldom shares with strangers. He is autistic–high-functioning, with none of the typical mannerisms of autism –the invisible disability.

During the pandemic, he was laid off from the most long-term job he has ever had. He was able to pivot successfully from work to college at home.

In the first semester, he was taking classes he loved. Philosophy seemed to be his favorite. He would often lead discussions with his peers.

In the second semester, suddenly he dropped all classes. He decided to change the medication he was prescribed for agitation and anxiety.

I was not privy to this decision until after it had been made. He is an adult. He didn’t need my permission.

My first thought was noooo! Not now! Has your psychiatrist lost her mind? Changing medication in the middle of a pandemic is a horrible idea!

He made this change due to a medical side-effect that could have been caused by the medication. His medical doctor agreed that he should try something different. His psychiatrist went along with the idea.

I sat in on the fifteen-minute appointments with his  psychiatrist. She rushed him through a series of questions, not stopping long enough to allow him to complete his answers. I knew she wasn’t getting an accurate picture of his experience.

As the person who has always advocated for him, I knew there were better ways and better times to handle this challenge. I am an Autism Parenting Support Group creator. I’ve been doing advocacy work for too long.

This isn’t our first time at the rodeo. In Cole’s senior year, facing graduation and the transition to adulthood, his anxiety slowly grew into anger. He had the most epic autistic meltdown ever just months before graduation. Our house was turned upside down, keepsakes broken, glass all over the floor.

When self-injurious behavior began, it could not be ignored or controlled. We had no choice but to call for help. Black people don’t like calling authorities for help unless it’s an absolute last resort. We don’t want the police in our homes.

We hoped to get a crisis team or mental health officer, but you never know what you’re going to get. The 911 dispatch sends whoever can get there the fastest. In our case, it was the local police.

This is Texas. We are Black. It was the most expensive call we have ever made. Cole was not harmed physically, but we were all harmed mentally. Thousands of dollars and a side order of PTSD later, the bogus charges against him were dropped.

During quarantine I would sit on my front porch watching my neighbors walk their dogs, thinking, Who are all these white people walking around the neighborhood? I’ve never seen them before. They look suspicious. (I wrote this sarcastically on Facebook.)

The reality is, Black men have died of “looking suspicious.”

Elijah McClain, an autistic Black man died after an altercation with the police in 2019. He was walking home. “He looked suspicious.”

February through May of 2020, the murders of three innocent Black people were all over the news.

Breonna Taylor was murdered by police while she was sleeping inside her home.

George Floyd was murdered as we watched how callously a policeman treated his life and humanity.

This social injustice added to our trauma. We started to feel like hate was all around us.

Can white people be trusted? Which ones secretly hate us? Who smiles at us but supports and votes for this President whose behavior and policies harm our family?

We used to feel safe in our mixed-race, predominantly white neighborhood. Now, overwhelming fear and anxiety hovered like an ominous cloud. We were demoralized, paranoid, and angry.

My son is intelligent and well-spoken, with excellent grades and a kind heart. What does that matter in the dark of night when he likes to go out for a walk? He has done this for years. I never worried so much until now.

I watched as my son’s relationships with friends began to unravel. When his friendships fell apart, his mental health also unraveled.

For months, nothing in terms of medication worked. Each med seemed to make matters worse. His peaceful soul could not rest. Lack of sleep made him more agitated and volatile. He would go off and give us a verbal lashing at any given moment.

Eventually, he agreed to try an outpatient program at a local hospital where he could be monitored, and medications could be slowly tweaked by a doctor.

Unfortunately, the meds they tried made him so tired he couldn’t wake up to attend the groups. Then the staff blamed him for not being able to wake up. They threatened to kick him out. It all crescendoed when the changes rendered him unable to sleep at all.

I didn’t know how to help him. He ended up an inpatient –voluntary, but he quickly changed his mind once he saw they had no intention of helping him.

Later, he confided this was the most trauma-inducing experience of his life. The psychiatrist was dismissive and inaccurately diagnosed him. My son called him on it. He was adamant about his medical goals and his rights as a patient. Here is this young Black man who is very articulately demanding his rights and they did nothing to help him. He ended up with the right to leave the hospital more mentally unhealthy than when he arrived.

He was traumatized and angry. He completely lost trust in doctors. He even lost trust in me, his biggest supporter. He saw me as a catalyst who conspired against him.

I have been the listener, midnight therapist, and caregiver for his entire life. I have been able to remain calm during his storms (although this later impacted my own mental health).

I was exhausted from years of mothering him and his brother (also on the spectrum). I lost the capacity to play my role. I reached a level of burnout. I had to put on my own oxygen mask or die.

My son didn’t like my new boundaries. He was angry. He needed me, and I wasn’t there the way I had always been.

I felt helpless when he started to hate me. I knew this was a manifestation of autism and mental illness. This was not the Cole I know. There were moments when I felt unsafe with him. I didn’t know if he was safe. We both were experiencing PTSD from so many meltdowns in the past.

Life wasn’t pretty at our house. Again, the last thing we wanted to do was call for help and have the police in our home again.

We survived the storm. I’ve come to realize that this is his journey, whatever the outcome. The time of leaning in to impact the outcome is over.

The thing that kept me going was the hope that someday he might use these experiences to share his lived story.

Today, he is a published writer who has shared his story.

He has a short-term goal of becoming a Mental Health Peer Advocate. Recently he interviewed for an internship with a local mental health agency. He starts next week.

I won’t give up on him ever, but I have to let go—to surrender. I’m not in control anyway.

My mental health has become my priority. I need self-care, and not just bubble baths and spa days. Self-care is having boundaries, getting my own therapy, exercising, reading, and finding joy in social interaction. I work on my own mental health like it’s my job.