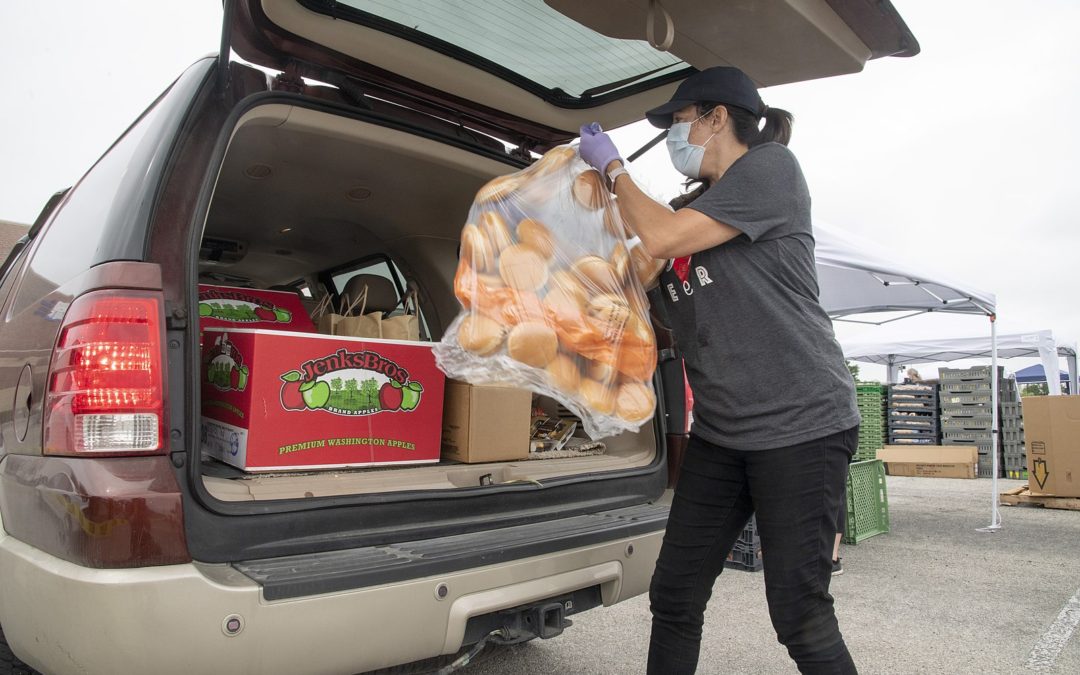 Starting with this statement by our executive director, Dr. Octavio N. Martinez, Jr. in March of 2020, the Hogg Foundation, like much of the rest of the world, had to pivot to a world in the midst of a public health catastrophe. Since then, we have tried to help people make sense of the COVID-19 pandemic from every angle, from its impact on children and youth, the stakes for the elderly, health equity, and the larger cause of creating a healthier, more equitable future.

But none of this would mean nearly as much without the tireless work of our grantees and their efforts to fulfill their missions in spite of how much the world has changed. Here we focus on just two: Texas CASA (Court Appointed Special Advocates) and Galveston County Food Bank.

Texas CASA, which supports local CASA (Court Appointed Special Advocates) volunteer advocacy programs, is just one of several of our grantees to receive supplemental support funding from the Hogg Foundation in response to the COVID-19 crisis. We spoke with Bryan Mares, Public Policy Fellow with Texas CASA, about his experience advocating for and connecting with children in the child protection system, especially during these unprecedented times.

“We recognize that every child that enters the child protection system experiences trauma,” said Mares. “But I think with the time we are living in now, with COVID, you are compounding that trauma with this isolation and inability to meet with appointed CASA volunteers in person, which is always preferred. To ensure CASA volunteers are still meeting with children, we’ve purchased Zoom licenses for all the CASA programs in Texas so that technology isn’t a barrier to still maintain these meaningful connections while remaining safe.”

Texas CASA was one of nine organizations from the 2018-2020 cohort of Hogg Policy Fellows grantees to receive supplemental funding to bolster its operations during the pandemic.

The Hogg Foundation awarded $473,117 in funds to 26 organizations to support their operations in response to COVID-19.

In total, the Hogg Foundation awarded $473,117 to 26 organizations in response to the COVID-19 pandemic, listed below. This includes $60,000 to support Dell Medical School to support psychiatric first aid for health care workers, as well as $10,500 to seven different food banks representing 92 Texas counties where people struggle with hunger.

These actions reflect the foundation’s ongoing adaption of its operations to the new reality represented by the pandemic and its emerging understanding of what communities need to protect their mental health in the time of COVID-19.

Before the pandemic hit, the Galveston County Food Bank was one of 28 organizations to be awarded grant funds to support complete count efforts in Texas for the 2020 U.S. Census as part of our $2.1 million grant initiative, Texas Communities Count. Of course, the pandemic introduced new barriers to Census outreach activities on the ground, which tend to rely on face-to-face conversations and gatherings. Despite these obstacles, the Galveston County Food Bank has not lost momentum with their Census efforts.

“We were able to maintain census momentum during this time because as the food bank, the need for food never stops,” explains Census Outreach Organizer Kelly Boyer. “Our mindset was, we are going to keep giving out food, so any way we can incorporate Census messaging into that, we are going to do it.” This included printing over 12,000 bilingual flyers, tailored to different audiences, that were distributed across the Food Banks 16 partner sites and 30 mobile sites across Galveston County.

Coronavirus isn’t the only obstacle confronting Census get-out-the-count efforts. The decision by the U.S. Census Bureau to shorten the response period by a month increases the likelihood of an undercount in Texas. As it is, Texas lags behind much of the rest of the country in its response rate (with a self-response rate of 61 percent compared to a national response rate of just under 66 percent) and Galveston County lags further still, with a self-response rate of just 43.5 percent. Organizations like Galveston County Food Bank need all the support they can get. Of particular importance is meeting the needs of limited-English speakers.

“Parents don’t speak English and there’s some fear surrounding the Census and fear of privacy of information,” said Boyer. “A way we have been able to at least get around that somewhat is that in July we hired two additional Census assistants and they’re both bilingual. They’re able to share in-the-heart language to these families about why the Census is important for them personally. It has been amazing to see the response and our Latino families start to get counted.”

“Without the support from this grant, I think any Census efforts done through our food bank would have definitely been put on the back burner,” said Boyer. “We know the 2020 Census is important, but when there’s disasters and when things like COVID strike, it’s all hands on deck to make sure we are doing the best we can to get food out to the community.”

“Parents don’t speak English and there’s some fear surrounding the Census and fear of privacy of information. A way we have been able to at least get around that somewhat is that in July we hired two additional Census assistants and they’re both bilingual. They’re able to share in-the-heart language to these families about why the Census is important for them personally. It has been amazing to see the response and our Latino families start to get counted.”

We Protect Health By Prioritizing Equity

While it may be the case that coronavirus doesn’t discriminate, people and health systems still do.

The coronavirus crisis exposes our society’s weaknesses. It’s time to correct them.

Coronavirus reveals why it’s time to insist on health equity.

How can you protect your own mental health and the well-being of your community? These resources have some ideas.