Changing the Landscape of Psychology Training in Texas 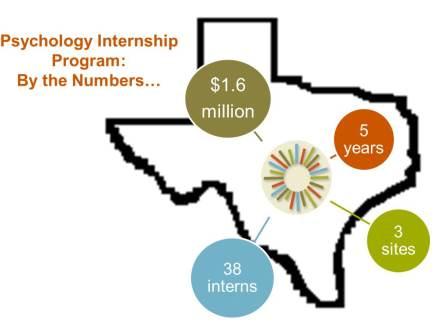 In October the Hogg Foundation announced the award of $1.6 million in grants over the next five years to create internships for doctoral psychology students at Scott & White Healthcare System in Temple, Travis County Juvenile Probation Department in Austin and University of Houston–Clear Lake Office of Counseling Services.

We hope to accomplish two goals through this initiative:

A major barrier to addressing this workforce issue is caused by a lack of psychology internship positions in Texas that are accredited by the American Psychological Association (APA). This contributes to the workforce shortage because students in clinical, counseling or school psychology doctoral programs must complete a one-year full-time or two-year half-time internship to complete their degree. Without the degree, they cannot become licensed to practice in Texas.

The Association of Psychology Postdoctoral and Internship Centers (APPIC) holds an annual nationwide match day in February to pair psychology graduate students with accredited and unaccredited internship positions. Nearly one in four students seeking an internship failed to match with a position during this process in 2009, leading the APA to declare the situation “a growing and serious concern” (Statement of the APA Board of Directors on the Internship Imbalance Problem, 2009).

We were gratified to learn that all of the sites received numerous applications and the Scott and White internship positions were filled during the national match day in February. The other Hogg funded sites are currently completing phase two of the matching process to fill the remaining positions.

We anticipate that together, these three sites will train an estimated 38 interns during the next five years and will create at least nine new internship positions by the end of the grant period, thus truly changing the landscape of psychology training in Texas. Because the imbalance of supply and demand for accredited internship opportunities is a national issue, we hope that foundations in other states may replicate this initiative.