What Happened to You, Part I: Back to School (with Trauma)

Hogg Foundation for Mental Health · Episode 138: Back to School (with Trauma) 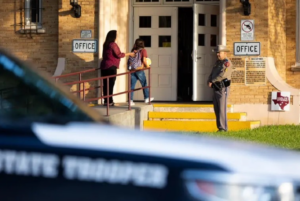 How do we keep Texas’ school children safe? What exactly do we mean when we talk about ‘safety’? And how might we recast the whole conversation on school safety?

In the first of a series of podcasts addressing the relationship between trauma and well-being, Into the Fold host Ike Evans speaks first with Brian Lopez, reporter for the Texas Tribune, about how Uvalde parents are thinking about their children’s safety as the new school year starts. We also hear from Sandy Salinas and Rosie Guzman from Communities in Schools of Laredo, Inc., a grant partner of the Hogg Foundation, about a different approach to providing for the long-term well-being and safety of youth, with direct services and support for both their physical and mental health.

Putting on a Brave Face

Parents and children in Uvalde are understandably anxious about heading back to school this fall. Even so, most parents are putting on a brave face, hoping to be emotional bulwarks for their kids

“They don’t want to expose their children to the fear and anxiety that they’re facing,” says Brian Lopez after his recent visit with Uvalde families preparing for the first day of classes.

Both physical safety and mental well-being are top of mind. While some parents are sending their kids off with bulletproof backpacks or new cellphones, many are also taking their kids to counseling.

The Uvalde school district is also working to help students feel both physically and emotionally safe. In addition to installing unscalable fences and additional security cameras, the district has contracted with online mental health services and hopes to provide more counseling services on campus.

Overall, schools are moving forward with an increased awareness of children’s mental health.

“They’re looking at providing more of those counseling services for students and being a little bit more open about mental health, social, and emotional needs of students,” says Lopez. “That’s something that a lot of people in the community didn’t think about before this tragedy.”

Other significant concerns of the parents have not been addressed, however.

“At the district level [parents] want to see more accountability, accountability spread out to any officer, any person who could have done something to stop all those children from dying,” says Lopez.

Parents are also looking for more support at the state level.

Many are advocating for an increase in the legal age requirement for buying assault rifles, but “that’s something lawmakers aren’t ready to do,” says Lopez. “That’s not somewhere the state is meeting them.”

This frustration and an increased awareness that Uvalde’s leadership doesn’t reflect its predominately Latino population has led to a “civic awakening” in the community, however.

“People are going to be more involved in what the school board does, what the city council does, what county commissioners do,” says Lopez. “So, you’re really seeing this community coming together and trying to figure out in what ways they can make change. They know at the end of the day it will come down to them.”

“We’re kind of like a first responder for families at the school,” says Rosie Guzman, master trainer and quality assurance specialist at CIS Laredo. Whether it’s food or clothing, says Rosie, “We’re the ones that are ready to jump in to provide those necessities.”

“We know that when students have suffered trauma, there is no timeline on the healing process.” says Sandy Salinas, director of program services at CIS Laredo.

CIS Laredo describes its mission as surrounding students with a “system of support, empowering them to stay in school and achieve in life.” But it is much more than a dropout prevention program. It’s also an introduction to a new conversation on school safety—one that focuses on creating positive school environments and supporting the overall well-being of youth.

As host Ike Evans concludes, “It’s the kind of safety we get when we put our hearts and minds to the task of healing the loneliness and alienation and radicalization that will only lead to more Uvaldes and make us less safe.”