“The pathway of violence is a process, it is not an event. There is a lot of opportunity as a school district … where we can really put the brakes on that pathway to violence, as we are connecting students with those preventative interventions.” 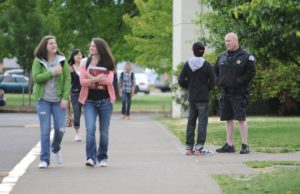 Leading into the 86th Texas Legislative Session, a number of events contributed to the attention given to mental health and safety in schools, two related topics we have previously covered on this podcast. Recent tragedies, including the Santa Fe High School shooting, emphasized the need to explore how to best support students, their teachers, and our schools as a whole. Senate Bill 11 (SB11), a major focus of this session, aimed to address safe and supportive schools, with mental health being just one component of this legislation. The bill also included provisions around school “hardening” strategies and staff-training in case of emergency.

This week we are joined by Tracey Spinner, Director of Comprehensive Health Services and Mental Health for Austin Independent School District (AISD), and Shannon Hoffman, Policy Program Specialist for the Hogg Foundation for Mental Health, to discuss SB11, and the challenges of and strategies for balancing mental health and safety in schools.

During her 16 years working with AISD, Tracey Spinner has participated in many a legislative session. Of the most recent session, Spinner says her experience was “very positive and hopeful, truly.” Speaking to representatives on both sides, she found that legislators across the board were keen to learn from experts and to help to support mental health and safety initiatives in schools. Spinner felt an eagerness to help from everyone she interacted with: “They really wanted to identify what are the best strategies, what are those best practices, in addressing the needs of young children – and adults, for that matter – in the mental health space.”

School ‘Hardening’ and the Role of Mental Health

Even around the discussion of the “hardening” of schools – which refers to investments in physical safety measures such as metal detectors, inspection wands, and school marshals – Spinner found that legislative attention was given to the role of mental health. In fact, this was the aspect of the legislation that she found to be the most encouraging. While Spinner concedes that the “hardening” of schools may be appropriate for districts, she emphasizes that every district should have a choice as to where they allocate their funding. “But within that choice,” she stressed to policymakers, “please include funding or a focus around mental health in schools.” Spinner says she and her colleagues were pleasantly surprised with the final version of SB11, which included mental health in schools as an initiative that could be funded under the bill.

AISD began the conversation about school-based mental health services about six years ago when they opened their first mental health center at Crockett High School, Spinner recalls. A short pilot program, which placed a full-time psychologist at the school to assess and treat consenting students and parents, demonstrated a clear positive effect on overall student well-being. During the four-month pilot, all 35 participating students showed improvements either clinically or academically; students were attending school more frequently, and even their grades improved during this short period of time. “It was very clear that we were onto something,” remembers Spinner.

Building from a foundation of social and emotional learning, Spinner and her team developed a “multi-tiered system of support” that would address mental health as a district. The resulting AISD initiatives provide students and teachers with resources, skill building opportunities, and academic counseling across every one of their campuses. “We have grown from one campus that has one mental health clinician,” Spinner stated, “all the way now to 45 campuses – elementary, middle, and high school – that have multiple full-time clinicians that are providing mental health clinical services to students, staff, and family members.”

The hefty 56-page SB11 covers multiple aspects of school safety and mental health. Hoffman broke down some of the high-level concepts for us: “It is really addressing both sides of the ‘school of thought’ around school safety,” which she describes as the “physicality, hardening, security, preparedness” perspective on the one hand, and the point of view focusing on mental health services and supports on the other. The bill includes numerous provisions, starting with developing and amending rules around facility standards, including updates to the requirements for the district’s multi-hazard emergency operations plan. The bill also gives the Texas State School Safety Center oversight of schools’ safety and security audits.

“One of the things that was really great, I think, about [the bill],” Hoffman says, “is that it’s expanding the health curriculum and the education that students are going to be getting, starting in elementary school [through] high school, looking at mental health conditions, substance abuse, managing emotions, establishing healthy relationships, responsible decision making, suicide prevention, as well as digital citizenship – which I think is incredibly important now, with this day and age.”

In an ideal world, people would ask each other about their mental health the same way they would, say, ask each other what they had for breakfast today, says Spinner, who emphasized the importance of checking in with friends and having “honest, vulnerable conversations” about mental health. “We want everybody to feel very safe,” Spinner says, which is why she stresses the motto, “see something, say something.” By fostering an environment where individuals do not fear punitive action for reaching out and saying they are concerned about someone’s behavior, schools and support systems can address situations from a “proactive lens,” before it becomes a crisis.

Both Spinner and Hoffman agree that while SB11 represents a landmark in addressing mental health and school safety, there is still plenty of work to be done. Looking ahead, one opportunity for breaking down stigmas and encouraging supportive school environments is to combat the misinformation about violence and mental illness. “We know mental illness does not predict dangerousness,” Hoffman emphasized. “Mental health is just one component of addressing the overall school climate.”

Beyond addressing mental health in schools, Hoffman hopes the next legislative session continues to implement strategies and supports that cultivate a positive school environment. “It’s not only beneficial for kids that may need that clinical mental health or have a diagnosed mental illness,” Hoffman underscored, “It is really beneficial for all kids, all students, and the entire school.”