Raising the Voices of Individuals with IDD

“They need to understand that people with disabilities need to be believed,” James Meadours says. 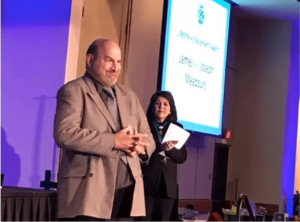 Earlier this year, National Public Radio (NPR) aired a five-part series on the “hidden epidemic of sexual assault” against individuals with intellectual and developmental disorders (IDD), for whom the prevalence of sexual assault is seven times greater than those without disabilities.

To say the statistics are shocking would be a severe understatement, but the call to action goes beyond sexual abuse. Here to discuss the implications of the NPR investigation—and where we can go from here—is IDD self-advocate James Meadours. Joining him is our policy program officer Colleen Horton, who previously worked at the Center for Disabilities at The University of Texas at Austin.

You’re Not Alone: The Empowerment of Self-Advocacy

Meadours’ self-advocacy skills have been honed by nearly a decade of practice. He gives regular talks at a local rape crisis center, leads training sessions with first responders, and has presented at The Arc’s National Convention.

It took two episodes of assault, however, for Meadours to find the courage to come forward and seek recourse. “People never talk about it,” he says. “When I was in high school, I was too ashamed to tell my dad and my mom…because I did not trust anyone.”

After Meadours was assaulted for the second time in 2005, he began to explore the ideas of self-determination and self-advocacy—first as a source of empowerment, then as an instrument for instigating change. “That really helped me kick another notch about my life and the struggles I deal with to help people realize they’re not alone,” he says.

In acknowledging and developing his own autonomy, Meadours became better equipped to pave his own way forward. “It’s been 26 years living out on my own, having different jobs throughout my life and career,” he says. “Now I’m happy living on my own, with some friend support, with natural support, and also help people be inspired to help others.”

A fundamental lack of trust and accountability isn’t the only reason why cases of assault on individuals with IDD frequently remain unreported or uninvestigated. “Oftentimes, if it is reported by a family member or someone else, it’s rarely confirmed,” Horton says. “It’s one person’s word against another, and the person with intellectual disabilities may not always have the language skills to adequately express what has happened to them.”

What’s Next? “We Need to Be Heard”

Horton has a 27-year-old daughter with developmental disabilities who, like Meadours, has experienced significant trauma. Although the NPR findings have put a much-needed spotlight on IDD, she stressed the need for further action. “What we really need is a culture shift that addresses the mental health and wellness of individuals with IDD,” she says.

Misconceptions about the realities of living with IDD are held not only by the general public, but service providers, policymakers and other institutional actors as well. “Far too often, any challenging behaviors are attributed to the disability,” Horton says. “When the disability overshadows the potential for mental health conditions, then the impact of the trauma is missed.”

Systems of treatment that favor regimens of behavioral control and compliance over a focus on wellness and recovery do much to weaken the agency of individuals with IDD—in their own eyes, and in the eyes of the law. “We need to give more credibility to the experiences of individuals with IDD,” says Horton, “and not just blow them off because of their intellectual disability or their communication difficulties.”

No stranger to the battle for visibility and recognition, Meadours wholeheartedly agrees. “We need to teach our law enforcement people, and also state people, because we need to be heard,” he says.

Meadours hopes the expansion of a national self-advocacy network, as well as more trainings led by self-advocates, will get individuals with IDD the exposure and attention they deserve.

“That’s the next move of the self-advocacy movement,” he says. “We need to really take more initiative to talk about this issue, because oftentimes people are afraid that people will pass judgment.”

“We’re helping our peers know what’s going on,” continues Meadours, “and help inspire them to share their story.”