Creating Hope for Healing after Trauma

“Austin really is, in function, a system,” Joseph Parker says. “You touch one part…the whole system is affected.” 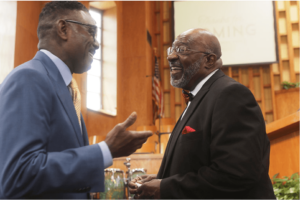 In early March, a series of package bombings went off across Central Texas, injuring five and taking the lives of two: 39-year-old Anthony Stephan House and 17-year-old Draylen Mason. While one bomb exploded at a San Antonio shipping facility, its destination was an address in Austin—where the other four bombings occurred.

The city mourned the loss of House and Mason, and a strong suspicion that the bomber was targeting communities of color left some residents more vigilant than others. To help Austinites cope, the Hogg Foundation partnered with Austin Public Health and Counter Balance ATX to host Hope for Healing, an occasion for the local community to come together for dialogue and connection.

Speaking at the event, and joining us on this week’s episode of Into the Fold, was Joseph Parker, Senior Pastor of David Chapel Missionary Baptist Church in Austin. He reflects on the “wounds of the spirit” that communities sustain in the aftermath of traumatizing events, as well as the moments of solidarity that cultivate conditions for healing.

An Aggravation of Historical Wounds

The bombings occurred over a two-week period. During that time, information about the perpetrator and his motives was patchy and speculative, leaving gaps in the narrative that generated widespread anxiety. For predominantly minority neighborhoods, the situation was especially tense.

“It was, in a sense, a continuation of historical wounds that the community has experienced for a variety of reasons,” Parker says. He refers to Austin’s long history of residential segregation—a history that is achingly alive for those who, like Parker, have lived there for decades and witnessed gentrification’s creep.

“In a lot of ways, [the bombings] caused the community to modify their living,” Parker says. “Not only in those immediate weeks…but ever since.” The mobility of community members—“the ways we move throughout the city”—had to be reconsidered, as did other day-to-day routines. Parker found himself apprehending the arrival of packages; he took extra caution when approaching and opening them.

Racially charged incidents like the bombings challenge the city’s reputation for progressive politics—reminding us that true equity is more than a matter of red and blue. “Those of us who come from a perspective of being colored…know that it is not as progressive in reality as in some project,” Parker says. “It was not a difficult place to go—that our community was being targeted.”

Hope for Healing gathered Austinites, mental health experts and community leaders like Parker to help each other discuss and understand the bombings’ social and psychological consequences. Community meetings were held to achieve similar aims. “Either spoken or unspoken, it helped us understand the interconnectedness of our community,” Parker says. “We were all joined together—in a sense, it brought unity.”

Growing up in Birmingham, Alabama in the late 1950’s and 60’s, Parker lived through the episodes of unity and unrest that impelled the Civil Rights Movement. He recalls accompanying, as a preteen, his father and Dr. King himself—a family friend—to a bombing site that still smelled of smoke.

When bombs went off in Austin, Parker couldn’t help but draw parallels. “Here I go again, experiencing something in the 21st century that I thought was behind us,” he says. But this time, he had a different role to play—not as a spectator, but an “equipper,” the term Parker uses to define his pastorate.

Faith has long been a source of resilience and well-being for historically marginalized communities. Speaking of members of his church and community, Parker says, “I want to equip them—expose them to [mental health] specialists—because my training and experience is limited. I can only go so far with them.”

Even though moments of crisis catalyze much-needed conversations and collaborations between communities and their institutions, they can also create impetus for long-term partnerships that facilitate a continual exchange of ideas and resources. “Even though the Hogg Foundation is a secular organization,” Parker says. “In my mind, it is a partner with the faith community and certainly with our church.”