Too Human: An Investigation of the Language We Use to Talk About Mental Health and Illness

Since I came on board as communications manager at the Hogg Foundation for Mental Health, two and half years ago, I’ve been struggling to reconcile the language the foundation and its allies use to talk about mental health with my own notions about how we should be talking.

I do my best thinking through writing, so in order to work through some of these tensions and questions, I wrote a long essay, which I ended up calling “Too Human.”

I published it this month on Medium.com, which is a relatively new publishing and social media platform designed to encourage and enable dialogue and discussion. The essay ends with a fairly provocative suggestion that we should rethink some of our basic ways of talking about mental health and illness. I write:

The essay also includes this lovely illustration by Darryl Cunningham, a UK-based artist and the author of the graphic novel Psychiatric Tales. 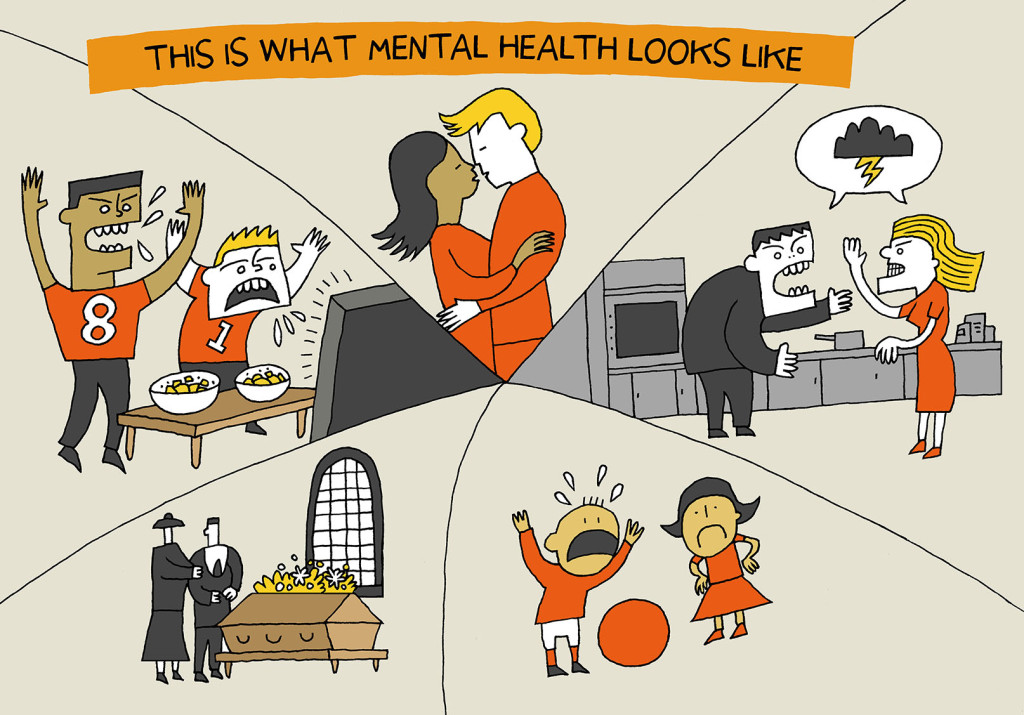 We’ve been working with Darryl and other artists recently to create art that can accompany our policy-related pieces. Darryl was working from this passage in the essay:

I’d love to see a public awareness campaign from a major mental health group that aims its language in the other direction. Instead of humanizing and normalizing the experience of mental illness, imagine a campaign intended to destabilize the idea of “normal” by interrogating whether normalcy, or for that matter “mental health,” is as uninteresting or as uncomplicated as we persuade ourselves it is. The tagline wouldn’t be, “This is what mental illness looks like.” It would be, “This is what mental health looks like.” The television spot would include various scenes of people being too much: grieving survivors keening uncontrollably at a funeral; a married couple arguing bitterly in the kitchen of their home; two lovers passionately kissing; a young brother and sister yelling at each other and then, seconds later, hugging and laughing; rabid sports fans with flecks of spittle on their lips, screaming with fury as their team gives up a run.

In addition to writing the essay, and commissioning the art, we solicited a series of responses from colleagues who work in various realms of mental health. I’ve linked to them below:

I did this in part because the platform encourages it, but more because I wanted to recognize that my intuitions on the subject were just that, only my intuitions. They’re not the last word, and they’re not meant to be. They’re an invitation to a conversation.

I encourage anyone who’s interested in the essay to also read some or all of the responses, which are each fascinating in their own right. And if you’re inclined, please contribute your own responses on Medium as well. Or email them to me at daniel.oppenheimer@utexas.edu.

Starting with People First
By Paul Gionfriddo, president and CEO of Mental Health America and author of Losing Tim: How Our Health and Education Systems Failed My Son with Schizophrenia.

What the Black Power Movement Can Teach Us About Contemporary Mental Health Campaigns
By Samuel Beasley, assistant professor of counseling education and counseling psychology at Western Michigan University. Beasley’s primary line of research focuses on predictors of academic outcomes among Black college students.

Beyond False Dichotomies
By Leah Harris, a mother, survivor, and a storyteller working for cultural shift in how we understand and respond to emotional distress, mental health, trauma, addiction, homelessness, incarceration, and suicide.

On the “Too Human”
By Frank Richardson, professor (emeritus) of educational psychology at the University of Texas at Austin. Richardson is the author of Re-Envisioning Psychology: Moral Dimensions of Theory and Practice.

When Life Happens…
By Collette Chapman-Hilliard, assistant professor of psychology at the College of Staten Island. Her research interests relate broadly to examining the psychological experiences of racial and ethnic groups, particularly people of African descent, as well as exploring issues of social justice and diversity.

Lessons on Changing the World from the Man Who Helped End Don’t Ask, Don’t Tell
Q&A with Aaron Belkin, the founding director of the Palm Center, a research institute that played a key role in the successful effort to end the military’s “Don’t ask, don’t tell,” (DADT) policy.

Yes! We Can All Be Too-much
By Daniel Garcia, psychologist and psychoanalytic candidate based in Houston, Texas. In addition to his clinical work, Garcia conducts research in the areas of psychoanalytic phenomena, the psychology of religion, anxiety disorders, shame, and self-forgiveness.