Then and Now: Revisiting the School of the Future 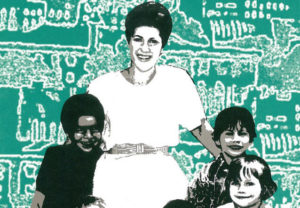 Mental health is not just an attribute of individuals, but is also a product of community conditions. The places where people live, learn, work, play and pray have an enormous impact on individual and collective well-being. Nowhere is this more true than in schools. A ground-breaking initiative from our past paints a revealing picture that holds many important lessons for today.

From 1990 to 1995, the Hogg Foundation funded the School of the Future, a demonstration project involving elementary and middle schools in four Texas cities: Austin, Dallas, Houston and San Antonio. The program was conceived as a way to deliver a range of health and human services, with a focus on early intervention and prevention, to low-income, predominantly minority students and their families.

The idea of a “full-service” school grew out of the work of two pioneers in child development: Dr. James Comer and Dr. Edward Zigler, both of Yale University. Two key elements of their work influenced the School of the Future program: first, recognizing the link between a child’s developmental needs and academic achievement; and second, emphasizing collaborative approaches involving parents, teachers and staff in achieving measurable student outcomes. As envisioned, the School of the Future wouldn’t just boost student achievement, but would be a watershed for community renewal, collaboration and service delivery.

A total of $1 million was pledged to support the School of the Future project over five years, as well as an additional $1 million for evaluation. Four middle schools were chosen, along with the seven feeder elementary schools. The demonstration sites were uniformly characterized by high rates of poverty and high concentrations of minority students.

The most important early decision was the selection of four project coordinators. These individuals needed the skills to lead the multifaceted, intensely collaborative work the project demanded. The project had five core elements:

The foundation deemed the School of the Future project a success as of 1997. All sites succeeded at expanding the size and scope of the services they provided; reported gains in school climate, student achievement and teacher perceptions; and were convinced the full-service model had staying power. The foundation highlighted three key lessons with important implications for today:

The School of the Future was a prototype of the collaborative approach to mental health that is now central to our grantmaking strategy. New initiatives such as Well-being in Rural Communities provide an opportunity to reinvigorate an old idea: that leveraging relationships while combining the best aspects of flexibility in design with consistent benchmarks can lead to transformative results for communities.