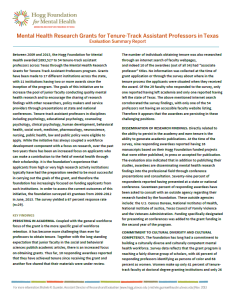 Making an Impact in Academia in Texas

The Hogg Foundation launched the Mental Health Research Grants for Tenure-Track Assistant Professors in 2009 to increase the pool of junior faculty conducting quality mental health research and to encourage the sharing of research findings with other researchers, policy makers and service providers through presentations at state and national conference.

In 2013 the foundation conducted an evaluation of the grant program in order to identify successes and ongoing challenges. 43 grant awardees who received funding from 2009 to 2012 were surveyed, of whom 29 responded. The survey findings appear to confirm the foundation’s initial optimism about this grant program, and indicate a number of promising trends: