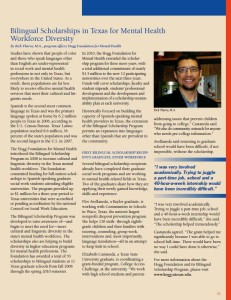 Studies have shown that people of color and those who speak languages other than English are under-represented in social work and mental health professions in not only in Texas, but everywhere in the United States. As a result, these populations are far less likely to receive effective mental health services that meet their cultural and linguistic needs.

Spanish is the second-most common language in Texas and was the primary language spoken at home by 6.2 million people in Texas in 2006, according to the U.S. Census Bureau. Texas’ Latino population reached 8.6 million, 36 percent of the state’s population and was the second largest in the U.S. in 2007. 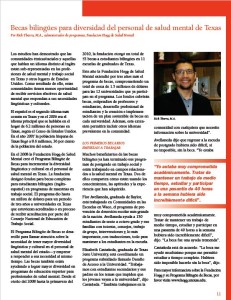 The Hogg Foundation for Mental Health introduced the Bilingual Scholarship Program in 2008 to increase cultural and linguistic diversity in the Texas mental health workforce. The foundation committed funding for full-tuition scholarships to Spanish-speaking graduate social work students attending eligible universities. The program provided up to $1 million for a three-year period to Texas universities that were accredited or pending accreditation by the national Council on Social Work Education.

The Bilingual Scholarship Program was developed to raise awareness of—and begin to meet the need for—more cultural and linguistic diversity in the state’s mental health workforce. The scholarships also are helping to build diversity in higher education programs for mental health professions. The foundation has awarded a total of 53 scholarships to bilingual students at 11 Texas graduate schools from fall 2008 through the spring 2010 semester.

In 2010, the Hogg Foundation for Mental Health extended the scholarship program for three more years, with a total additional commitment of nearly $1.5 million to the now 12 participating universities over the next three years. Funds will cover scholarships, faculty and student stipends, students’ professional development and the development and implementation of a scholarship sustainability plan at each university.

Historically focused on building the capacity of Spanish-speaking mental health providers in Texas, the extension of the Bilingual Scholarship Program permits an expansion into languages other than Spanish that are prevalent in the community.