The Angel and the Assassin

“Everything from childhood trauma to infections in the body or chronic stressors in adult life can activate microglial cells, triggering the Jekyll and Hyde behavior in our brains that scientists are only just beginning to understand.” 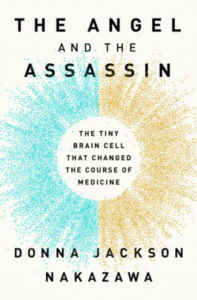 I Think, Therefore I Am

In 1637 the philosopher Descartes proclaimed, “I think, therefore I am,” putting forth a theory of mind-body dualism that, for centuries, was supported by anatomical studies of the brain-body connection. Across medicine, psychiatry, and neurology, it was held sacrosanct that the brain was immune-privileged. In other words, it was believed the immune system held sway over every system in the body except for the brain. In this episode of Into the Fold, we discuss the newly understood role of microglial cells, which are brain cells that, according to groundbreaking scientific research, prove the interconnectedness of our bodies’ and our minds’ regulatory systems, disrupting centuries-old assumptions about mental, cognitive, and physical health issues. Award-winning journalist Donna Jackson Nakazawa returns to the podcast to discuss the implications of this discovery and her new book, The Angel and the Assassin: The Tiny Brain Cell that Changed the Course of Medicine.

The Role of Microglia

Until recently, scientists believed microglia had one job in the brain: removing damaged cells. In 2012, however, researchers discovered the much more interesting role these cells are playing. Microglial cells begin their lives as immune cells that, on the ninth day of fetal gestation in the womb, break-off from the white blood cells and travel up to reside in the brain for the duration of a human’s life. Acting just like the immune cells in our bodies that are triggered by environmental stressors or infections, microglial cells respond to triggers by springing into action to help protect us. Unfortunately, just as immune cells can attack tissues and organs when overly-stimulated, microglial cells can transform into destroyers that will eat away at the synapses in our brains that we need in order to think clearly or have a joyful mood state – the very same synaptic connections that we see impacted in bipolar disorder, depression, Alzheimer’s, and OCD.

“We know we have several different ways in which the immune cells in the body are talking to the immune cells in the brain,” explains Nakazawa. “Both respond to the world around us – emotional stressors, toxins, infections, physical traumas. White blood cells in the body and the brain are in this intricate dance with our environment 24/7.” If something worrisome or threatening stirs up inflammation in the body, a fight or flight response is triggered to decide how much danger we are in and how the body should respond. In those instances, “the immune cells from the top of our head to the tip of our toes are responding.” When this kind of response is triggered over and over again, throughout a person’s life, there is a cumulative effect over time. Everything from childhood trauma to infections in the body or chronic stressors in adult life can activate microglial cells, triggering the Jekyll and Hyde behavior in our brains that scientists are only just beginning to understand.

As terrifying as this might all sound, Nakazawa reminds us that this discovery has revealed a world of possibilities for regulating microglial cells, now that we understand exactly what they do and how they do it. It turns out that all the genes expressed in depression are expressed in microglia, and all the chemical imbalances that we associate with mood disorders are mediated through microglia. Scientists are exploring methods of rebooting microglial cells that can coax them back to homeostasis, so that they cease to attack our synapses and act again as protective agents in our brains. Under the right circumstances, this could lead to new methods for preventing or even halting diseases.

For more on the mind-body connection, and the crucial role that childhood trauma plays in brain development and function, check out Episode 17 of Into the Fold, when we interviewed Nakazawa about her previous book, Childhood Disrupted: How Your Biography Becomes Your Biology, and How You Can Heal.