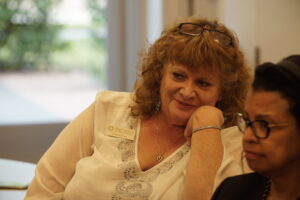 On February 14, 2021, the Hogg Foundation and the world lost a champion of mental health, Stephany J. Bryan. Stephany passed away due to complications related to COVID-19. Our dear friend and colleague had an irrepressible spirit, and an unforgettable sense of humor. On this episode of the podcast, we are joined by the Hogg Foundation’s own Vicky Coffee and Tammy Heinz, as well as Luanne Southern, Executive Director of the Texas Child Mental Health Care Consortium – three of Stephany’s longtime friends and colleagues – to celebrate the life and legacy of this rare and unique voice for mental health.

“She loved to laugh,” Vicky remembers. “She was all about the jokes, all about the humor.” Once, before a meeting where foundation staff would be meeting many grantees for the first time, Stephany advocated for Hogg staff to wear — what else? — hog noses. “It helped us learn to be real with our grantees and let them know we weren’t perfect,” says Vicky.

“She was straight up honest with anyone,” adds Luanne. “It did not matter to her where you came from, or what your title was, what your position was in your organization, she was going to be real and be authentic.”

The Work of a Consumer & Family Liaison

Stephany had a gift for levity, but she was also a fierce advocate. Hired as consumer & family liaisons in 2008, Stephany and Tammy were the first of their kind at the foundation. It was an entirely new way of doing business: working directly with those who have lived experience of mental health recovery—and fostering their leadership. “We recognized early on it was a gift to be part of the foundation,” remembers Tammy. “What a gift to have people value our lived experience in a way you don’t get everywhere. At the same time, there was a level of fear from both of us – how much do you share?”

The first couple of years were challenging, Tammy recalls. They included frequent post-meeting chats in each other’s offices as Stephany and Tammy processed their new roles and where they fit into the foundation. After a time, they realized they were doing the work of program officers in addition to representing the lived experiences of consumers, and thus “program officer” was added to their titles — a sign that their work was equally valued by the foundation.

What would life at the Hogg Foundation be like if Stephany had never been hired? “We would be missing the whole Stephany experience,” says Vicky. “That could probably best be described as just an authentic, passionate approach to what we call ‘the work,’ but what Stephany would call her purpose.”

“Stephany was an advocate – and she wasn’t just an advocate for mental health,” Vicky adds. “If there was a fight to go to, Stephany would be right there with you, because she was most bothered by situations where people were treated unjustly and unfairly and inequitably. To me, we would be missing that fight.”

Stephany’s legacy extended well beyond the foundation, having touched the lives of many who worked with her over the years in mental health and child welfare advocacy. “We would always say that we have to listen, and that listening is as much of an action as speaking,” Luanne reminisces. “When we listen to the stories of individuals that we work with, no matter if we are in child welfare or mental health or juvenile justice — any of the big systems — to truly listen to those stories and understand the uniqueness that every person brings to the table.” Stephany never took a “cookie-cutter approach” to her work.

“She was one person who I can say honestly changed attitudes, values, assumptions, and beliefs that many of us had in the past, and that many systems have had,” says Luanne. “She truly as one individual made such a huge difference.”