Peer Support with an Artistic Flair 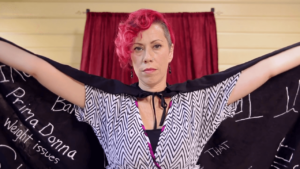 When my teammate Christina arrived on the Austin State Hospital peer support team three years ago, it was clear that she had a theatrical bent. I will never forget her cobalt-blue hair and the feathery dangling earrings she wore the day I met her. She soon introduced her love of the arts into peer support work on the west patio.

The west patio is largely a forensic area. Most of the people there are trying to establish competency to stand trial. In many cases, it takes a long time. So, sullen faces were common in 2013 because the novelty of being on the west patio had long since worn off.  The people attended classes to obtain relief from the monotony, but the general feeling was, “Why should I go to class? I’ve seen it all before.” It was possible to discern how bored they were by how bored I was going over there. The atmosphere was like a jail; long stretches of uneventful time punctuated by occasional altercations.

In addition to the recovery support groups, panels, and one-on-one conversations we were already having with these residents, we began having poetry challenges. Getting started was not easy. Christina had to find people who wanted to work with her. She did, but it took time. All beginnings are hard, everywhere, and laying the groundwork took dedication from everyone who shared the vision. The work paid off, however, because once those who loved the arts found each other, a team was formed to host subsequent events.

The first performance was held at night. It was unusual at that time for peer supporters to be on the units at night.  I remember arriving after dark, seeing the stars shining over the outdoor patio, and seeing the decorated room from a distance broadcasting a glowing welcome. There was a banner hanging over the makeshift staging area announcing the event; clients had helped to create it. There were marquee lights hung festively in the room. In this transformed atmosphere, I wondered what would happen next. Christina, who must have been nervous although she never showed it, introduced the event and welcomed both clients and staff.

Then these people got up, one by one, to say their pieces. The grim expressions gave way to lively animated faces and gestures. Some spoke poetically of their longing for children; many of the people confined to the west patio are parents. Others described sunrises over Texas countryside. A few told stories of struggles with trauma and abuse, or of being arrested with drugs in the car. Love poems to boyfriends and girlfriends were featured, along with mourning over breakups. There was plenty of hip-hop rhythm.

Underneath the sameness of the surroundings, these are real people. Vivid people. Talented people. Their creativity was unleashed in a way that forced a surprised spectator (me) to see not only them but the entire ASH population differently. The world of the west patio had been to me full of of hard walls, hard floors, and hard people. But on the night of the Poetry Challenge, a multitude of untold stories got told.

Art challenges followed poetry challenges. They worked the same way. People on the west patio produced one original piece of art per day for 14 days, and the showcase at the end allowed them to display as many of their creations as they wished. Once again, previously untold stories got told, this time by visual means.

Recently came the night of the West Side Talent Show. By now the arts team has had a lot of practice putting on events. They had their chance to demonstrate their skills that night. The previous low-key changes to the environment were upgraded. The unit was transformed into peer support’s version of Broadway. Christina had that week acquired a real, mobile stage to replace the makeshift staging area that we had used before. She introduced her new stage that night. Peer supporters Stephen and T.K. provided microphones, technical assistance and DJ services. The show was about to become much more elaborate. Even the snacks, which have been a welcome feature from the beginning, took on a gourmet flair. In place of the usual chips, coffee, and punch, we had tantalizing roll-up mini-sandwiches, sausages, and tiny cookies among the offerings.

“If there’s food, that always brings people in,” Christina once told me with a smile. When passers-by saw the food on offer that night, a long admission line formed almost immediately!

But it was not just the food that loomed large during the West Side Talent Show. A surprising number of people signed up to perform. As usual, there were plenty of hip-hop routines, poems, and popular songs by country singers and rock stars. But there were also spiritual songs and hymns of gratitude sung. Given that this is a population that will not go home when they leave, but back to courtrooms and jails, the outpouring of thankfulness was amazing. For me, it was very moving. It’s likely that the performers and audience were thankful to have an opportunity to share their talents with each other and be in such a beautiful space.

The arts allow people to engage the right side of the brain, which is under-utilized in this population as well as in the world at large. Art shows at psychiatric hospitals are fairly common, but this sort of staged performance is not. The talent is there, but it’s mostly hidden. However, it wants to come out; all that’s needed is an invitation. I have seen what happens when people are invited to share their talents. So I would urge anyone who works with hospitalized people, or veterans, or those using mental health clinics, to host such events as this.

When the performance concluded that night, we all looked at each other with glowing smiles. Distinctions between staff and clients had, for the duration of the show, melted away. When people come together to participate in the arts, a feeling of community and camaraderie emerges. In the arts, there is no us and them. There is only us.