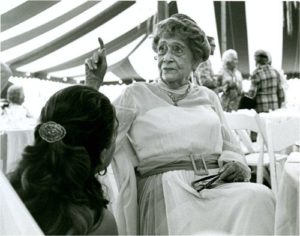 Ima Hogg deeply influenced the Hogg Foundation’s development during its first few decades. First by providing a guiding vision and the money through her late brother Will’s estate, and then through frequent collaboration with the foundation’s first director, Dr. Robert Lee Sutherland. In one letter to him she expressed her frustration with the cycle of tragedy and inaction:

“I have seen time and again some tragic incident occur which suddenly stirred public opinion to demand that something be done to remedy matters. There would follow expert surveys on the community and state level, with recommendations made for ways and means with which to alleviate the conditions. Then It would be found that there were insufficient funds to implement the suggested over-all program, and it would develop that there were not enough trained personnel to carry on.”[1]

Miss Ima had strong intuition for how to improve conditions and the money to back it up. Having noted the need for a stronger mental health workforce, she created the Ima Hogg Scholarship fund.

In a letter dated July 6, 1956, Miss Ima requested Dr. Logan Wilson, president of the University of Texas at Austin, ensure her recently donated stock would go to “scholarship aid in the broad field of mental hygiene,” and be administered by the Hogg Foundation.

“At the moment I am especially impressed by the need for more trained psychiatric social workers and visiting teachers. No doubt at some other time a different training need in the area of mental health will be particularly acute. I used the broad term ‘psychiatric education’ to designate the entire field, but in no way to limit the discretion of the staff in choosing the mental health training need of greatest importance at any one time.”[2]

Miss Ima was a forward thinker and made sure to include flexibility when setting her intentions for this scholarship fund. Throughout its long life, the scholarship has taken many forms. It started as a single scholarship given to a student focused on social work in the psychiatric department at the University of Texas in Austin. Decades later it sought graduate students who were preparing for a career in mental health services to children and their families – still only open to students at the University of Texas at Austin and only one student per year.

In 2006, after reviewing the original intentions of the scholarship fund, the scholarship was broadened to include every Texas-based graduate school of social work to recommend one student to receive an Ima Hogg Scholarship. Administrators concluded that “since the Hogg Foundation is a statewide operation, it certainly could be argued that Miss Hogg did not intend the scholarships to be limited to what is now UT-Austin, or perhaps even to the UT System.”[3] Opening up the scholarship to all of Texas has allowed us to make a bigger impact on the workforce and honor Miss Ima’s original intentions.

Indeed, we are not the only ones who believe so. Within the Hogg Foundation’s archives there is a thank you note from an Ima Hogg Scholarship recipient and her father, who had the pleasure of meeting Miss Ima before she passed away. Miss Ima certainly would have been proud to see who her scholarship has helped.

But she’s not alone. Another Hogg Foundation luminary who would have beamed with pride is Stephany J. Bryan, our program officer and consumer & family liaison who sadly passed away this past February. From the time of her hire in 2008, the Ima Hogg Scholarships were part of her portfolio as a program officer. The program was dear to her, and she was key to shaping its contemporary focus and character. Since we’re talking about women making history, you should check out our podcast that touches on the trails Stephany blazed as one of our two consumer & family liaisons.

Part of our educational mission is to document, archive and share the foundation’s history, which has become an important part of the histories of mental and public health in Texas, and the evolution of mental health discourses nationally and globally. Archival information about the foundation is available at The Dolph Briscoe Center for American History at The University of Texas at Austin, including, but not limited to, the Ima Hogg Photographs and the Robert Sutherland Papers. We also have a robust collection at the foundation office. Research questions and appointments can be made by contacting our archivist at hogg-archives@austin.utexas.edu.