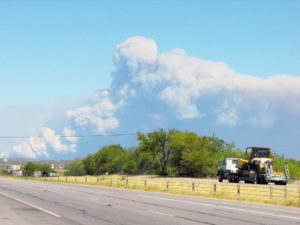 This is a series spotlighting the grantees of the Hogg Foundation’s Collaborative Approaches to Well-Being in Rural Communities initiative. Check out others in this series on the good work happening in Brooks County, Morris County, Nacogdoches County and Victoria County.

In July 2018, the Hogg Foundation awarded $4.5 million across six grantees of the Collaborative Approaches to Well-Being in Rural Communities (WRC) initiative. One grantee, Alliance for Greater Works, received funds to coordinate the initiative, and the other five—all in rural Texas counties—are using the funding to develop or build upon an existing collaborative to strengthen resilience, mental health and well-being in their communities.

Through this project, we seek to address the community conditions that contribute to mental health disparities and the significant inequities that exist in Texas, and leverage the power of inclusivity and shared decision-making to create and implement community-driven solutions. It’s a tall order, thus, we’ve given each collaborative three years to assess their community’s needs and assets, build new relationships, and identify strategies that lead to better mental health for everyone in their community. The grantees are in the first of these three years.

Today, we’re spotlighting one of the five community collaboratives, located in Bastrop County. Led by the County Judge Paul Pape, Bastrop County Cares seeks to build a diverse collaborative of community liaisons, including leaders from faith circles and veterans to name a couple examples. Operating under the name Resilient Bastrop, the collaborative will engage members of historically and geographically excluded groups to bring their voice and presence into decision-making processes with the goal of mobilizing inclusive, systems-level change.

According to the Robert Wood Johnson Foundation (RWJF) County Health Rankings, Bastrop County ranks 191 out of the 242 counties in Texas when it comes to its physical environment, an indicator that aggregates data on air pollution, poor water quality, housing problems and commuting difficulties. Low ranking numbers (e.g., 242) indicate poor conditions and high ranking numbers (e.g., 1) indicate strong conditions. For health behaviors, Bastrop’s ranking falls to 207—meaning it fares worse than more than three quarters of Texas counties on measures like obesity, physical inactivity, and substance use.

In addition, African Americans, Hispanics, veterans and other marginalized populations are more likely to populate unincorporated peripheries, which hinders their participation in civic engagement and community recreation events. Barriers to communication and connection leave those living on the fringes more vulnerable in moments of crisis—like the seven federally-declared disasters (e.g., flooding and wildfire) that Bastrop has seen in the last eight years.

Even though Bastrop citizens are “Texas Strong”—showing “tremendous resiliency” in the face of adversity according to Hogg Foundation program officer Rick Ybarra—individual strength can only amount to so much in the absence of dependable community support.

To encourage the participation of Bastrop’s most isolated “micro-communities” and build relationships across cultural and geographic barriers, the Resilient Bastrop collaborative’s liaisons plan on using non-traditional engagement strategies. By organizing kitchen table talks in the homes of community leaders or local churches and conducting community forums, the hope is to create organic opportunities for meaningful dialogue in places familiar to the populations they’re trying to engage.

“I think there’s a lot we can learn from them,” Ybarra says, “and they realize it’s not so much about ‘bringing them to the table’ but about going to their table, to their homes and to their neighborhoods to begin the relationship building process that honors, respects and values their voice and life experience. I am optimistic,” Ybarra concludes, “that Bastrop County Cares will cultivate and nurture the development of a county-wide, community collaborative that is truly representative of the people of Bastrop County.”

Facilitated over time and with continuous outreach and relationship building, such candid conversations can not only build trust and understanding between people of different life experience, but also reveal valuable insights into the inequities that inform their shared experiences. Resilient Bastrop liaisons, working under a systems-level approach, will be able to use information to develop implementation plans for improving county wide well-being—paving the way for progressive policymaking, more inclusive decision-making, and more civic participation from community members.

There’s a reason why Bastrop County Cares emphasizes its “intermediary” role in supporting mental health and community well-being: their work can’t happen without the engagement and active participation of community members—all community members. “I think of the people in Bastrop County often,” Dan Kleiner, Finance and Development Director for Bastrop County Cares, says. “I think of what they’ve been through and what they’ve accomplished, and I know that none of them would be where they are today without their own stories of resilience.  I know that they know what resilience is, and like Rafael [program manager for Alliance for Greater Works] says, that knowledge is right here in Bastrop County, right now,” Kleiner concludes.